NORMAN GILLER is seeking urgent treatment for a medical condition that has yet to find its way into The Lancet. His doctor’s advised him to turn off his television

You know you have come up with something new when you can’t find it on Google. My complaint is called Tellysportitis, and the symptoms are a widening of the eyes, a sudden Tourette’s-like outburst, a pulling of the hair and a compulsion to kick the television screen.

It affected me more than most during the last weekend when in the space of 24 hours I witnessed England losing in the last seconds to New Zealand in the Rugby League World Cup semi-final … George Groves getting mugged by the referee in his world title battle with Carl Froch … England’s cricketers surrendering to the Aussies in the first Ashes Test … Ireland (I am one-eighth Irish) beaten in the last minute by the All Blacks … and, to finish me off, my Tottenham team taken to the cleaners and wrung out by six-goal Manchester City.

My heart surgeon (this is true) summoned me for a check-up on Monday, and was concerned that my blood pressure was up near boiling point despite my daily medication.

I explained the weekend’s woes and he managed to keep a straight face when suggesting a remedy: “Why not support Arsenal instead?”

More seriously, he has suggested I try to ration my watching of live sport on TV and also to cut down on fighting my corner on Twitter and Facebook. Yes, I have Twitteritis and Facebookism, too.

I came through the weekend from hell with some definite thoughts. For a start, England’s chastened cricketers need to motivate themselves to match the competitive spirit of the Aussies, otherwise they will come home without the Ashes and, worse still, without their self respect.

I have lived though watching Lindwall and Miller, Lillee and Thomson, McGrath and Brett Lee, and now Johnson and Harris wrecking England’s batsmen. Captain Cook’s men have the talent to conquer the Aussies. Now they need the character.

The same can be said of Tottenham Hotspur. They must hold their nerve, and their highly paid players should take responsibility and not hide.

In the online forums many of the fans loudest in calling for the head of Harry Redknapp have now joined the lynch mob who want to hang AVB from the nearest crossbar.

Andre Villas-Boas saying his players should be ashamed of themselves has not won him friends in the dressing room, but it was mild criticism compared with some of that dished out on the interweb. Defeats by Man United and Liverpool in their next two matches could lead to Tottenham’s passing strangers having a Christmas lacking goodwill.

I have always been concerned about the appointment of AVB. He is not much older than my eldest grandson, has never spent two full seasons at any club, and has never played the game at a decent level, which makes it difficult for him to look professional players in the eye. Even so, he deserves patience and support during what could develop into a major crisis, made worse by fans becoming abusive. 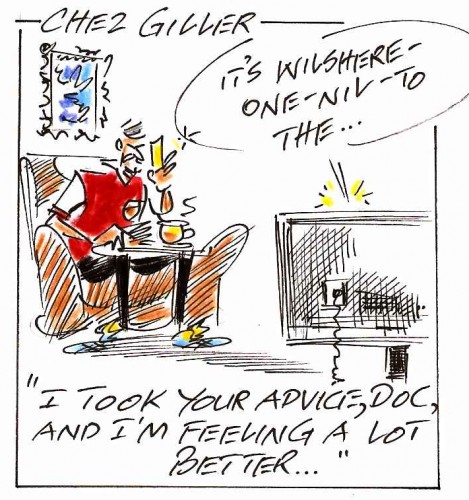 The one thing Spurs fans will not tolerate is negative football. It is not in the club’s DNA. I have nicknamed the team Sideways Spurs, and they have forgotten how to make the thrusting runs that lit up the Lane when Harry was in charge. Aitch is an old mate of mine, so I am biased, but there was rarely a dull moment when he held the reins. And he took the club to 4th-5th-4th end-of-season finishes. A tough act to follow.

As for George Groves, he should quietly thank referee Howard Foster for his premature stoppage of his war with Froch. Foster prevented Groves from taking a fusillade of heavy head punches that could have affected him in later life.

It is all very well we brave spectators sitting on our sofas demanding that he should be allowed to fight on, but Foster was closest to the action and obviously saw that Groves was groggy and suddenly vulnerable against an opponent who never knows when he is beaten.

Terry was desperately ill in his last few years, paying the price for all the head punches. I had the privilege of delivering his eulogy, and of the 200 ex-fighters who attended the funeral most were walking on their heels, a sign of punch fatigue.

LET’S REMEMBER WHAT our heroes go through to satisfy us spectators. I have recently learned that Peter Baker, a regular at right-back in Tottenham’s great Double-winning team of 1960-1961, is now lost in the fog of dementia.

He is the fifth member of that history-making side of whom I am aware to have succumbed to Alzheimer’s. It has moved me so greatly that I am now giving all profits from my Bill Nicholson book to the Tottenham Tribute Trust, a wonderful organisation that quietly helps the old pros who played their football with dignity and style in the days before players were swimming in money.

Please buy a copy to show that these are not forgotten heroes. Bill Nicholson, the Master of White Hart Lane, would have approved of us helping the players who did so much to put the club on the map under his guidance.

Spurs have been spending money right, left and down the middle in the transfer market since the sale of Gareth Bale. What I would like to see them (and all the major clubs) do is to channel some of the millions coming into the game into the pockets of the footballers who played for peanuts.

That would please me so much it might even cure my Tellysportitis.