NORMAN GILLER was going to take a trip down Memory Lane this week, but instead got diverted down the Cable Street of 50 years ago and asks: don’t shoot the piano player

I arrive on your screen today in a reminiscing and melancholy mood, and with no apologies for making this a hugely personal column that will shoot off in memory-motivated tangents. It is my Golden Wedding anniversary, but sadly I have made it alone. My lovely wife, Eileen, passed on after 45 years of an idyllic marriage.

You have my permission to leave the page while I go on a nostalgic journey back to a time when Harold Macmillan was at No10, Stanley Matthews still at No7 for Blackpool, you could get a pint of beer for a bob (5p for those of you with no memories from before the 1970s), there were three London evening newspapers, and Tottenham were powering to the first League and Cup double triumph of the 20th Century.

If you stay with me, you’ll discover this all leads in a meandering way to the story of how I started my Fleet Street career with a black eye.

We got married in Limehouse Register Office, which later became the archive library for the Labour Party. I was 10 days short of my 21st birthday, and a reporter/sub-editor on Boxing News. Our office was at 92 Fleet Street, bang opposite the Black Lubianka of the Daily Express, which would be my home through much of the 1960s and into the ’70s.

My off-the-peg £8/10/- wedding suit swamped my nine-stone frame, giving the appearance it had been half-inched from somebody three inches taller, and my winklepicker shoes pinched my toes as if I were wearing crab’s claws. Eileen looked as if she’d stepped out of a beautiful dream. What a lucky boy I was.

Our free-of-charge photographer was one Derek Rowe, a master cameraman whose gifted son, Steve, is a regular smudger for this SJA website.

The day before the wedding, Stratford Express Editor John Jenkins (later a backbench powerhouse at the Express and Telegraph) had bribed me back to the local paper where I had started my journalistic career in 1957. His offer I could not refuse: £10/10 a week (£10.50 for you post-1970s lot) to take over as sports editor from my great chum Harry Miller, who was bound for the Daily Mirror in Manchester.

On the evening of our wedding, Eileen and I left the two bedroomed Stepney flat that I had shared with Mum, Dad and three brothers to be driven to our new home in Stratford, a rented ground floor half of a Victorian terraced house where Olympic cheers will be heard next year.

Our Austin 10 “chauffeur” was Terry Lawless, with his wife Sylvia alongside him. They became our life-long friends. Terry had just got his boxing manager’s licence, and I helped him scouring for talent. We even got joint boxing promoters’ permits and were ready to launch the AngloSaxon Boxing Club in the Midlands, until warned off by the local Mafia. True.

But back to the Wedding Day.

Tottenham won 3-2 at Birmingham that afternoon, while at Chelsea news broke that Jimmy Greaves would be moving to AC Milan at the end of the season. Jimmy, with great taste, had a year earlier married a Stepney girl, Irene, and another lifetime friendship was forged after I had interviewed him for the Stratford Express. It has spawned 19 books so far, with the best still to come (I would say that).

Eileen and I never got round to having a honeymoon. Neither did Jimmy and Irene. In those days, for most couples a “honeymoon” was something from a Doris Day film.

Jimmy described his suddenly truncated stay in Milan as “like a living nightmare”. By the time Greavsie returned to London with Tottenham I had landed a holiday-relief subbing job on the sports desk of the Evening Standard.

I should tell you at this point that my Dad was the resident piano player at the Crooked Billet pub in Cable Street, 200 yards from our council flat. It was his second home. He used to get paid 30 bob (you should have the hang of this LSD business by now) for playing on Friday, Saturday and Sunday evenings, and on Mondays he would go to the pub to get an advance on the next weekend’s wages.

He could sup a bit could Dad, but drunk or sober he was able to knock out just about every old song ever sung in a pub. He copied the left hand rhythms of Charlie Kunz, and if you can remember him you must be ancient.

It was at the Crooked Billet that I celebrated landing the job at the Standard (I did not tell my bride that it was a temporary position; she would have had a baby … that came in the shape of the lovely Lisa a year later and Michael, now my writing partner, in 1966).

That night, Dad took a break from playing the joanna to go to the loo, and I decided to sit down at the battered old upright and play my banana-fingered jazz numbers. Not the best selection for a spit-and-sawdust pub in notorious Cable Street.

I was into the second stanza of Careless Love Blues when a rather drunk Irish docker, as wide as he was tall, staggered over and demanded: “Play I’ll Take You Home Again Kathleen.”

“Sorry, pal, but it’s not in my repertoire,” I said, a little too cockily. Another bad selection, this time of vocabulary and the sarcastic delivery. 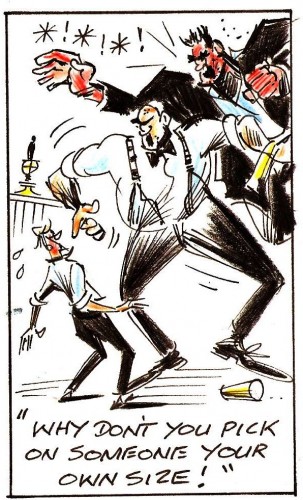 “Don’t give me that fucking repertoire bollocks,” he slurred (apologies for the profanity but this is verbatim). “Everybody knows that song.”

Now a third bad selection. I decided to stand up and say: “If you’re so clever, you play it.”

As a former East London schoolboy boxing champion at paperweight, I ducked inside the swinging left hand that he threw but could not avoid his head butt.

I hung close to him while clearing my head. At this moment Dad came out of the loo, giving a classic double take as he found me in a wrestling match. He had only been gone two minutes.

Dad instantly started firing street fighter punches at the ox holding his son, and then the docker’s mates decided to join in. Suddenly there were half a dozen of us throwing punches as if in a Wild West brawl.

The landlord, 6ft 6in tall and with a nose spread across his face, leapt over the bar, took a view of the four hefty dockers, his pianist and skinny son and made the wise choice of throwing my Dad and I out into Cable Street.

I went home to my bride with a closed right eye, which was still black with bruising when I started my Fleet Street career with the Standard the following week.

Fifty years on, I remember it as if it were yesterday. Just wish I had Eileen here to laugh with me at the memory.

But don’t feel too sorry for me. I now have a partner, Jackie Jones, who shares my life and laughs with me. Yes, I am a lucky boy. But I still can’t play I’ll Take You Home Again Kathleen.