NORMAN GILLER realises that his idea has got about as much chance as Osama bin Laden getting the Nobel Peace Prize, but he wants to reintroduce a maximum wage for footballers

With the new series of The Apprentice underway, we are into wall-to-wall Lord Sugar season on television, and it all kicked off on Sunday with his pessimistic view of football, although viewers tuning into his Lord Sugar Tackles Football programme on BBC2 could be forgiven for thinking they had stumbled on to an episode of Grumpy Old Men. There was more gloom and doom than at a meeting of the Nick Clegg fan club.

Were I a sports editor, I would be jumping on the Baron Sugar of Clapton bandwagon with a campaign against the ridiculous – obscene, even – wages paid to footballers. 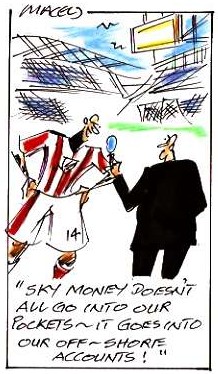 Many Tottenham supporters who remember his time as chairman of the club (10 years of his life wasted, according to Sugar) will tell you that he is talking through his derriér. They don’t think he knows one end of a football to another, turning a blind eye to the fact that it was his business acumen that saved Spurs from going bust in the 1990s.

It makes no sense that many clubs are a bank manager’s nod away from going out of business when there are billions pouring into the Premier League coffers from television and sponsorship deals and inflated ticket prices.

But where is all the money going? Most of it finds its way into the pockets of players, with six-figure weekly wages common in the top clubs, with large portions going to the players’ agents.

When I first started reporting football back in the late 1950s, the most a player could earn was £17 a week, which later rose to a giddy £20. These were the soccer slave labour days.

Then PFA chairman Jimmy Hill and secretary Cliff Lloyd led a brilliant game-changing campaign to kick out the maximum wage, and it was 50 years ago this season that Fulham made Johnny Haynes the first £100-a-week footballer.

It has gone from the acceptable to the ridiculous, with £50 million Chelsea striker Fernando Torres now said to be on £175,000 per week, and just four English clubs – Chelsea (£172 million), tomorrow’s FA Cup finallists Manchester City (£133 million), Manchester United (£132 million) and Arsenal (£110 million), between them spending more than half a billion pounds a year on player wages alone.

And those figures are from June 2010: that’s before Chelsea signed Torres, City signed Milner, Balotelli, Adebayor and Dzeko, or before United did their £10.5 million a year wage deal with Wayne Rooney.

I would like to see the maximum wage brought back, but rather than £20 a week, with a top wage of £20,000 a week. More than enough for any man to live on for a week, even with a wife and a couple of superinjunctions to support.

They have wage caps in north American sports, but there they have clubs in a franchise system and player drafts, so there is no transfer market as we have in European football. But we may be on the brink of having a form of wage capping forced upon the clubs by UEFA president Michael Platini (he could play a bit), through his financial fair play rules. 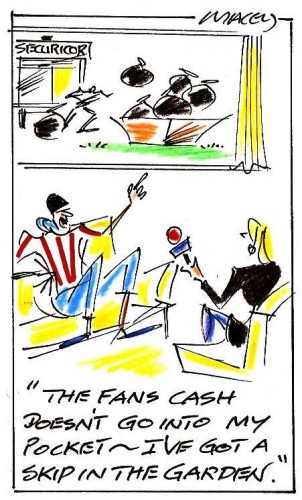 Platini shares the Sugar concern, and with a typically Gallic distaste for English domination of European football, he has pushed through regulations that will cramp the spending style of billionaire-backed clubs. Under the new rules, clubs’ losses are limited to less than £38 million for the period 2012-2015. After 2015, the clubs’ financial leeway is tightened up still more. They apply across Europe, so there should be a level playing pitch.

As the rules begin in just a year’s time, it ought to mean that the next couple of transfer windows could be particularly busy, otherwise clubs run the risk of having a roster of expensive players on their squad, but are barred from playing in the lucrative Champions League or even the Europa League.

I am always astonished how people manage to support their team week in and week out when tickets are sky-high to help pay the players’ obscene wages.

And if I was a football club chairman I would take another lead from Baron Sugar and give more concentration to the Apprentice scheme. In these straitened times, it surely makes sense to cultivate home-grown talent rather than pay the excessive transfer fees. The more that football finances are put under the microscope, the better the chances of clubs avoiding bankruptcy.

And the screams of anguish that you can hear? It is the sound of agents wailing, most of them parasites who stir players up into moving from club to club to boost their personal bank balances. Any over-paid players (and their agents) who will not accept sensible wage cuts should be told Sugar-style: “You’re fired.”

MY HUNDREDS OF FACEBOOK friends (actually, 1,645 at the last count) will be delighted/dismayed/disinterested to know that I am trying to break the Facebook habit. I have been hooked on the social network for a couple of years, but have now decided it is too stressful and time-consuming.

The majority of Facebookers are responsible, respectful and with intelligent and thoughtful points to make. But I am being beaten into submission by the moronic minority.

I have had to spend hours of my time on my Tottenham-biased page, defending Harry Redknapp in particular and Spurs players in general from savage, foul-mouthed attacks from so-called supporters.

You would think Harry deserves hanging from the nearest goalpost if you read some of the criticism aimed at him at the end of a season in which Spurs reached the quarter-finals of the Champions League, won at Arsenal for the first time in yonks and played some of the most exciting football ever witnessed at White Hart Lane. His critics have short memories, forgetting that Spurs were stranded at the bottom of the Premier League when he took over.

Yes, they have fallen away in the final run-in, but will still have a top-six finish and might have done better but for horrendous injury problems. Not once throughout the season has Harry been able to name what he would consider his best Xl.

Much of the spite – abusive and personal – has been levelled at Harry because he’s made no secret of his ambition to manage England. Though it was another case of a football manager giving an honest answer to a straight question. Asked at a press conference if he would like to manage England, instead of giving a fudged answer, Harry  spoke honestly from the heart, saying: “Of course I would. I cannot think of a higher honour than to manage your country and I would be proud to do the job.”

Spurs fans have since been pouring boiling oil on him, accusing him of a lack of loyalty and with having only short-term aims for Tottenham. Aitch is galloping after me into old git territory, and I admire him for still having ambitions to further his career.

He would make an outstanding successor to Fabio Capello, and with easy-to-understand English… well, Cockney, for the players.

There is, of course, the little matter of a court case to get through this July, which he just might find very taxing. If he comes through unscathed, I would be delighted to see him take over the England reins – and I know he will leave Tottenham much better off than he found them.