It was watching heavyweight sportswriters Hugh McIlvanney and Ken Jones talking head to head at last week’s wake following the funeral of Peter Batt that first parked the question in my mind: Who has been the greatest British sportswriter of all time? 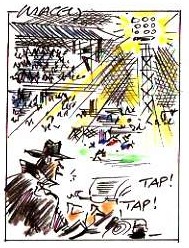 My thought process then gathered momentum and arrived at the verdict that we – the Sports Journalists’ Association – do not do nearly enough to honour our own.

Yes, we have an annual Sportswriter of the Year Award, but I am proposing something more permanent: A British Sportswriters’ Wall of Fame.

It can be set up here on this excellent SJA website as an online tribute, and perhaps we could persuade the British Olympic Association or the owners of Wembley, or Twickenham, or Wimbledon to give us a real wall on which to honour our finest sports scribes.

This is all coming off the top of my head, but hopefully my enthusiasm for the project will trigger action by our SJA committee and members – too many of whom, in my humble opinion, take this website for granted and do not get involved.

It should be our community centre, bringing us together to feed facts, stats, news, gossip and humour into the village world in which we live. Our own face-to-face book.

Where on this website are mentioned giants of the past like Peter Wilson, Desmond Hackett and Geoffrey Green? Who among you even know who Ivan Sharpe is/was?

It is like having a website on great footballers without mentioning the likes of Matthews, Finney and Lawton. 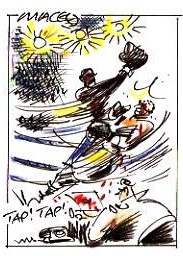 What I am proposing is a Wall of Fame based along the lines of the old Ring Magazine Hall of Fame that I used to devour when I was a kid first falling in love with boxing.

I present here an example of what it could be like, with 15 start-off names to each section and then one name added each year on the advice of an SJA Wall of Fame Committee and based on names submitted by members: 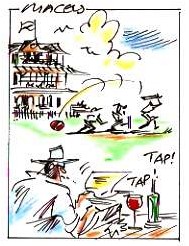 I am sure to have made several howlers and left out some obvious contenders, but the object of the exercise is to get you talking and thinking and acting. There is one father and son on here (Lionel and Jim Manning), and George Allison made such an impact as a pre-war football writer that he landed the job as manager of Arsenal.

Each name on the Wall would be linked to a full biography, with a sample of their work and it would provide a permanent reminder of their presence on the back pages of our newspapers.

To kick off, we would need to set up a Wall of Fame committee to decide the founder members of each group. A veteran like former Evening News and Daily Mail rugby and athletics writer Terry O’Connor – the Sports Writers’ Association chairman 50 years ago in 1961 – should be called in to advise on the old-timers list, and there would be need of input from our Scottish, Northern Ireland and Welsh colleagues.

It would be a fun and fascinating thing to do, and we would be paying lasting respects to giants of our profession.

If we don’t blow the trumpet for them, nobody else will.

Let’s build a Wall together.