Piers Morgan, Alan Sugar and NORMAN GILLER in a Twitterspat? It can only be the football season and discussion of the fate of Arsene Wenger. Plus a tribute to the late Sir David Frost. Cartoon by KEVIN MACEY

I got involved in the best of three falls on Twitter this week with the pontificating Piers Morgan, a journalist and television presenter I greatly admire – except his taste in football clubs. 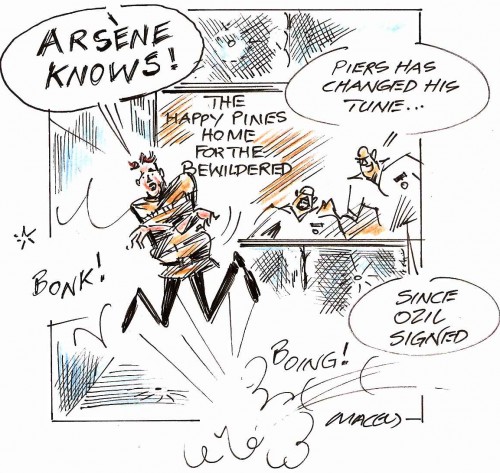 Piers is a Gooner, who has been a leading and belligerent voice in the “Wenger Must Go” campaign. He has a long-running war on line with Spurs-sweetened Lord Sugar, a public spat that shows neither in favourable light. They are like a couple of snarling bulldogs which need a bucket of water thrown over them.

I suggested to Piers that a man of his illustrious standing – CNN’s chat show host – should keep a low profile rather than push his jaundiced football views on Twitter.

My 140-character proposal was that he should follow the example of his distinguished predecessor Larry King, and act in a dignified way rather than make a fool of himself with his rants about Wenger. Back came unabashed Morgan with the comment that what he says about football is nothing compared to what King Tweets about baseball.

Morgan continually shows his ignorance of the Beautiful Game by his savage attacks on Wenger. Typical: “It feels like putting the family dog down. But sometimes you must be cruel to be kind.”

It is the view of this Spurs-soaked onlooker that Wenger has earned the right to choose the time for his exit. A true professor of the game, Wenger’s remarkable record of consistency should put him above criticism. Fifteen successive seasons of Champions League football is astonishing, and tough to take for those of us who prefer the superior taste of Tottenham wine.

I hope Piers brings the Arsenal lynch mob under control. They could be silenced by the fact that Professor Wenger just might have pulled off the best of all the transfer deals in his late-late capture of the wonderfully talented Mesut Ozil.

More interesting for me is how Andres Villas-Boas goes about putting together his expensive jigsaw, with seven signings in return for the transfer of the gifted Gareth Bale to Real Madrid.

There is huge pressure on AVB to deliver. People tend to forget his inexperience. He has yet to complete two full seasons in charge at any club, and knowing the many fickle fans among the Tottenham army, I wonder just how patient they are going to be.

I got 9/2 on Bale going to Real, a bet I struck in May when I received the news from the horse’s mouth. Gareth, one of the nicest, most grounded young men you could wish to meet, will approve that my winnings are going to the Bobby Moore Cancer Fund.

But I will not risk a penny piece on Tottenham making top four. It is going to take AVB time to get his new signings singing from the same glory-glory hymn sheet.

I was this week described as “the most argumentative man on Twitter,” the judgement of a man who called for Roy Hodgson to be sacked because he said he enjoyed the goalless Manchester United v Chelsea slog.

I am a pussycat really when compared with the likes of Piers Morgan and Alan Sugar, both of whom come across as a couple of Tweeting twits. And I am being polite.

PIERS MORGAN will concede he has a long, long way to go to match the broadcasting skill and impact of the late, great Sir David Frost.

Everyone from my generation will have favourite Frostie stories. Here’s mine:

In the 1980s I devised a series for ITV called Who’s The Greatest, in which celebrities argued the case for their sporting heroes to be recognised as simply the best. In the cricket programme, I had Frost representing Ian Botham against Willie Rushton arguing for Gary Sobers. Each had to put their views to a jury of 12 members of the public.

It would have been easy for David to have taken the money and run. But he poured himself into the assignment as conscientiously as if preparing to argue with Richard Nixon.

He invited Producer John D Taylor and myself to his sumptuous London apartment to go through the script inch by inch, fact by fact, stat by stat.

“To paraphrase Nye Bevan,” he said, “I don’t want to be sent naked into the studio courtroom.”

At the last minute the BBC refused permission for us to use their footage of Ian Botham’s innings of a lifetime against the Aussies at Leeds in the famous 1981 Test.

I gave David the news just before he was called from the green room to shoot the show that was being recorded “as live” in front of a studio audience. His eyes suddenly glinted with a hint of steel.

When it came to the Headingley Test segment, now covered with still photographs, David stepped out of camera shot and addressed judge Brian Moore and the jury: “I am relying on the director to cut this, but I just wanted to tell you that because of a ridiculous political war between BBC and ITV we cannot show the footage of Botham’s fantastic innings in the 1981 Ashes Test at Headingley.”

He then proceeded to describe every shot in graphic detail, bowed to the jury and then returned to his place in front of the camera and carried on as if there had been no break. David lost the vote 8-4 to Willie Rushton’s case for Sobers.

Before disappearing into the night, Frostie told me: “I’m pleased with that, because even Both would vote for Sobers. It should have been 12-0.”