NORMAN GILLER on a transfer saga that has lasted all summer, the dearth of homegrown talent in action in the Premier League, and the impressive TV debut of a pair of pundits that could be the new Saint and Greavsie

Most football reporters from “Fleet Street” have been heavily defeated by Tottenham in the Gareth Bale Saga, and they have not got within sniffing distance of one of the greatest transfer stories in history. I have been amused and sometimes appalled at how far out the newspapers have been in their coverage of a tale that could have come from Ian Fleming’s imagination.

I am not being wise after the event. I knew weeks ago that Bale was destined for the Bernabéu and that the Real deal was about to be done. I have a betting slip at odds of 9-2 to show I put money where my mouth was.

Stupidly, I went on Facebook and Twitter sharing my knowledge and even gave the quote Bale will shortly be issuing: “I have always dreamt of playing for Real Madrid since I was a boy.” Doubtless, he will also add it is the only club for which he would have left Tottenham.

I had the advantage of a rosy-faced 16-year-old Bale saying this in my hearing eight years ago, when Lawrie McMenemy tipped me off that the Southampton Academy had unearthed two exceptionally talented kids in Bale and his then housemate Theo Walcott.

All I got for my naivety in posting on the internet was shedloads of vile abuse from Spurs fans not wanting to face the truth. I could understand them not wanting to believe it, but seeing Fleet Street going down the same denial route made me wonder who on earth they have as their contacts these days.

Just on Sunday I was astonished to see Glenn Hoddle mouthing on television the mumbo jumbo that, “Real Madrid have no money and cannot afford Bale.”

Anybody who knows their football history will confirm that Real have been doing business like this for years, going all the way back to when General Franco was virtually running his favourite club. They are a law to themselves and have never failed to get their man despite being rodilla-deep in debt.

Everybody has been blinded by the smokescreen generated by Tottenham owners Joe Lewis and Daniel Levy. They have cleverly put out the no-deal stories while buying in players.

They have been spending like repentant misers while keeping Real Madrid dangling. We will soon find out whether or not they have played their cards right.

The facts are that Gareth wants to go to Real. Real want Gareth. Jonathan Barnett, Bale’s razor-sharp agent, wants Gareth to go to Real. But billionaire Lewis and Cambridge Hons graduate Levy have hung out for a crazy world record fee.

Real’s interest goes back a year, as confirmed by none other than the Happy One, Jose Mourinho.

It’s now in the hands of Levy and Lewis, who was born around the corner to me in the East End and to whose Hanover Grand nightclub I used to go in the 1970s when he was known as the Money Magnet. He is one of the most successful businessmen ever. Now he and Levy have masterminded the biggest transfer in football history and used the money in advance to build a brand new team: TTTBB, The Team That Bale Built.

I would not like to play poker with either Levy or Lewis. Their last card will soon be played as they attempt to pull off the Real Deal.

If it goes wrong at this late stage there will be only one person more astonished than me: Gareth Bale, who has set his patented heart on becoming a Galactico. 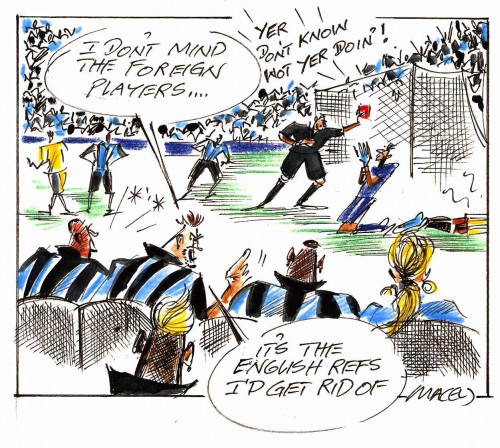 THERE WERE JUST  74 English players taking part in the opening Premier League games of the season, compared with 177 when the League kicked off in 1992.

It was back in that formative year when Coventry became the last Premier League team to kick off a season with an all-English team. And look what’s happened to the Sky Blues since.

Wearing my blue and white tinted Tottenham glasses, I am reeling at the number of foreign players being wheeled into the Lane. Four Englishmen have been shipped out in Steven Caulker, Tom Huddlestone, Jake Livermore and Scott Parker.

Here’s a startling stat to make you sit up and think: only three of the 23-man England under-21 squad (Ross Barkley, Jonjo Shelvey and Nathan Redmond) that flattened Scotland 6-0 last week managed to make it into the starting line-ups of their clubs when the 2013-2014 Premier League season started at the weekend.

IN PAIRING Gary Neville and Jamie Carragher, Sky Sports have found the new Saint and Greavsie. Dare I say Saint and Sinner?

Neville has already been cast as the good cop with Carragher the baddie.

In their early exchanges on their Monday night debut, Gary described van Persie’s skill in baffling unsighted defenders as being like having “a burglar in your house.”

Jamie quipped: “You’d be hiding under the bed.” With Greavsie-like speed and delivery, Gary instantly came back with: “You’d be the burglar.”

You could almost hear the sharp intake of breath of Sky producers at this non-PC portrayal of the stereotype Scouser.

But Merseysiders are always able to laugh at themselves, and it would need to be somebody very wooden headed to take offence.

Sky viewers are going to be in for a lot of fun as well as getting expert insights into the modern game. Presenter Ed Chamberlin is the perfect foil for the dynamic duo, keeping a low profile and steering their conversation that is like being privy to dressing-room dialogue.

The one thing they need do is slow down the Carragher tongue. His Scouse speak is often faster than a wheel being whipped off a parked car. Oops, more stereotyping.

Jamie has the fastest tongue in the North West and needs to bring it under control for Southern softies like me.