NORMAN GILLER goes back to the future with the blueprint for journalists looking to move into publishing, spotlighting BackPass, a stunningly impressive retro magazine 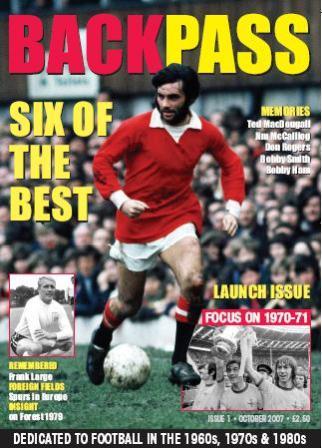 Born over a pint or three in the bar of a Herefordshire pub, BackPass is the brainchild of 50-something Midlands journalist and former semi-pro footballer, Mike Berry.

He found most of the bar room talk revolved around the football players and matches of his youth rather than the modern game, and he decided to tap into the nostalgia market. With the help and encouragement of his partner Sandra Nicholson, they got the first issue off the presses in 2007 as a subscription-only magazine, and it has since found its way on to the shelves of WHSmith.

I love the bravado of Mike and Sandra, who had the chutzpah to take their idea into the dreaded Dragons’ Den to try to get funding. They left empty handed, despite former Millwall chairman Theo Paphitis saying he thought is was a cracking read. But he is not silly enough to risk his money in a magazine world that has become notoriously perilous.

BackPass is seasonal rather than monthly, but punches above its weight in an increasingly difficult market that in recent months has seen the demise of the likes of Shoot, Calcio Italia, Football Punk, Non-League 24, Late Tackle and The Football Supporter.

The secret of the success of BackPass is the quality of the writing and authoritative articles from a string of exceptional reporters, including Phil Shaw, Alan Poole, Martin Smith, David McVay, Ivan Ponting, David Instone, Matt Eastley, Hyder Jawad and Adrian Milledge – all names recognised by readers of national and provincial sports pages.

I own up to being a regular contributor, happily accepting a 1960s fee. This is a labour of love for a magazine that affectionately recalls the Beautiful Game before avarice turned it into the Greed Game.

The next issue focuses on the history of the European championships, and I was charged with recalling the 1968 finals in which England finished third and Alan Mullery infamously became the first England player sent off.

I often see it misreported as Mullers being “the first England player red carded”, but the card system – created by English referee Ken Aston – was not introduced in international football until the 1970 World Cup finals.

My press box peers who witnessed the semi-final between Yugoslavia and England will confirm it was one of the most vicious matches ever played at championship level. 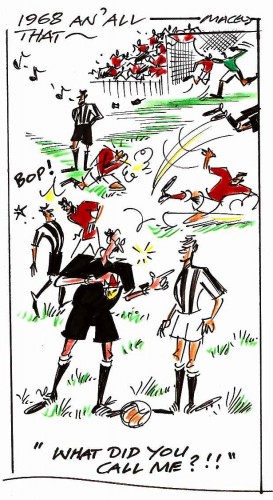 If our SJA website visitors could be transported back to that period they would see football unrecognisable from today’s more sanitised and softer game. This was one of the last tournaments in which the boot ruled, and scything tackles were a physical part and parcel of the proceedings.

Mullers got the old-fashioned pointed finger when – after being hacked for the umpteenth time – he retaliated with a deliberate kick in the unmentionables of an annoying wasp of a player called Dobrivoje Trivic.

This was in the closing moments after Yugoslavia had scored the only goal through Dragan ‘Magic’ Dzajic, who would have been a certainty for the Premier League today. He was like George Best and Jimmy Greaves rolled into one, quick, clever and decisive.

The players kicked lumps out of each other. Through English eyes it looked as if the Yugoslavs were the authors of the conflict, but neutrals could see that England were also putting it about in response to some vicious tackling. Later, the Yugoslavs claimed with some justification that Norman Hunter had started it all when his ferocious early tackle left their chief schemer Osmin a limping passenger. From then on every Yugoslav challenge was laced with menace.

You would never see a game like this today. There would be more red cards than Paul Daniels has ever flashed

You’ll get my take on the match in BackPass. But better still, they have an exclusive interview with Alan Mullery. What he told me at the time was one of the more unexpected quotes I ever put into my notebook: “My missus is going to kill me …”

In many ways the 1968 European championships were a turning point for football. The powers-that-be at FIFA were determined to make the game less physical.

If you could sit down and watch a full replay of the Yugoslavia v England match you would understand why many thought the game had become too much of a physical challenge, with skill being forced to take second place to strength.

Well here’s one old hack (in the old-fashioned sense) who thinks it has now gone too far the other way. Yes, it is often prettier to watch than in the old days but the edge has gone off the game and it is often not as thrilling as it used to be. This view is coming, remember, from somebody weaned on watching goalkeepers battered into the back of a net and full-backs threatening wingers with gravel rash if they tried to go past them.

The tackle should be an important part of a defender’s armoury, and football must always be a game of physical contact.
But I will concede that in Florence on June 5, 1968, the players of Yugoslavia and England took physical force to unacceptable levels.

Football has never been quite the same since. Read about the way it used to be in BackPass, an independent magazine that proves journalists can run their own show without the Murdochs, Northcliffes and Desmonds with their snouts in the trough.