Britain’s only magazine dedicated to basketball will go on sale for the first time on Monday, vowing to provide coverage of the sport from the NBA to the British Basketball League. 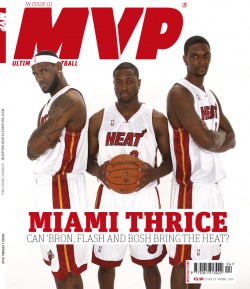 MVP, published by Response London, will initially be a £3.50 quarterly, with features provided by some of the leading writers on both sides of the Atlantic.

Issue 1 includes coverage of the arrival of NBA superstar LeBron James in Miami, a look at Great Britain’s chances of a 2012 Olympic Games place, a profile of British basketballer Yorick Williams and an interview with British rapper Kano.

“We want to provide a stylish, quality product that will stand out on the shelves and appeal to basketball fans in the UK as well as abroad,” said Greg Tanner, MVP’s editor.

“Our mission is for MVP to feature some of the best writing around, as well as showcasing the greatest photography. And we believe it offers advertisers a perfect outlet to target the young urban market – as well as the wider basketball community.”

The magazine is accompanied by a website – www.mvp247.com – which contains up-to-the-minute news updates as well as multi-media content.