James Morgan’s journalism has performed a great service for one of his football heroes, as ANTON RIPPON discovered on reading the resulting book 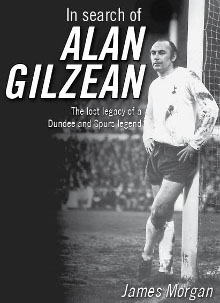 It had been bugging James Morgan for a long time. The Herald sports journalist is a lifelong Tottenham Hotspur fan and the more he looked into the whereabouts of Alan Gilzean, the more questions he turned up about one of Spurs’ greatest players.

The stats were there: 169 goals for Dundee, including 52 in one season (a Scottish league record that stood until Henrik Larsson broke it in 2001) and a league championship medal with the Dark Blues. Then a decade at Tottenham and another 133 goals as he formed memorable partnerships with Jimmy Greaves and Martin Chivers. Oh, and 12 goals in 22 appearances for Scotland.

Then there was a short spell in South African football with the Johannesburg-based Highlands Park. And an unhappy spell with Stevenage Athletic. Phil Ravitz, sports editor of the Stevenage Comet for more than 20 years, tells Morgan that Gilzean’s time in charge there was disastrous: “He knew as much about Southern League football as I know about aeronautical engineering … It was a shambles, but in fairness to him the club was in a bit of a state when he took over.”

That was certainly true: soon after Gilzean arrived, the Stevenage chairman, a friend from his Spurs days, was convicted at the Old Bailey of handling counterfeit money and handed a two-year prison sentence. Which was more than sad for Gilzean since he had no interest in management and had taken the job only as a favour to an old mate.

So what happened next? Well, there was an account that Gilzean had started to run a transport company not far from White Hart Lane. That his marriage had broken up. And that he was currently living almost as a down-and-out.

It is here that Morgan – now firmly on a mission to track down what happened his man – begins to run out of clues. It seems that all that is left of this particular Tottenham legend is a few yellowing newspaper cuttings, a page on Wikipedia, and some unsubstantiated (isn’t it almost always?) internet gossip.

More remarkably, Gilzean doesn’t appear in the Scottish FA’s Hall of Fame. How can it be that one of the finest Scottish players of his generation remains unelected, while a Swede, Larsson, and a Dane, Brian Laudrup, sit up there with the gods?

No one at Tottenham has a clue as to his whereabouts, and former playing colleagues haven’t seen him for years, in some cases not since they played their final match together.

All this, however, simply spurs Morgan on and his quest takes him on a personal journey all over England and Scotland, starting with Gilzean’s birthplace, in the small Perthshire village of Coupar Angus where, again, there is no public – or even private – recognition of probably its most famous son.

Eventually, though, through Gilzean’s son, Morgan tracks down his quarry. And then his problems begin all over again because the journalist wants to put the record straight and write a book about this hitherto invisible legend. The trouble is that Gilzean is a complex individual whose sheer horror at such an idea threatens to obscure his legacy for good.

Almost his first words to Morgan are: “Only seven people in the country know my phone number and the last thing I want to do is to stand in a bookshop and see a book about me on the shelf.”

He also tells Morgan: “To be honest, I’m not really interested in the Hall of Fame. It doesn’t really matter to me. I would have played football for my local team, Coupar Angus Juniors, if I hadn’t played for Tottenham or Dundee.”

Morgan wants to respect Gilzean’s wishes, but he also wants to write this book. Gilzean, in turn, seems touched that Morgan wants to do it. An uneasy relationship develops in which Gilzean agrees to “think about” it.

In the end, the book, In Search Of Alan Gilzean, is published, although the subject never really collaborated and he certainly didn’t attend the launch in Dundee. As many of his former playing colleagues assembled in a local cinema to honour him, perhaps he was strolling along the seafront at Weston-super-Mare, where he now lives. Maybe he was much nearer, at Carnoustie where son Ian, who also played for Spurs and Dundee, is based. Wherever, he was certainly well out of the limelight.

James Morgan has produced a book that gives proper recognition to Alan Gilzean’s place in the story of British football, as well as something of a football detective story. His efforts have also ensured that Gilzean is now a member of that SFA Hall of Fame, something for which Morgan lobbied long and hard.

And on that occasion, the man himself actually turned up. In fact, as he stepped forward to accept his award at Glasgow’s Hilton Hotel in November 2009, Alan Gilzean told the guests that it was the best night of his life in sport.

He has a lot for which to thank his biographer, then. It was a pity that Morgan wasn’t there to witness the moment. Morgan was certain that the man he had spent months tracking down would be a no-show. So he decided to work instead.

In Search of Alan Gilzean – the lost legacy of a Dundee and Spurs legend by James Morgan (BackPage Press, £9.99)