DELHI DIARY: JOHN WRAGG is one of many SJA members enjoying the friendly chaos that is the Commonwealth Games in Delhi

The Main Press Centre is 10 minutes from the Ramada Plaza Hotel, one of the main press hotels here. Tops. 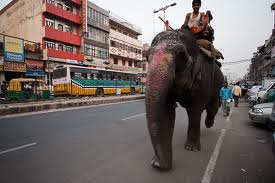 It takes an hour to do the journey on the official transport because it stops at all other media hotels on the way (two of them next door), goes through intense security, inside and outside the bus, and waits 10 minutes, minimum, at each hotel.

So we dumped that idea. Three of us, me, Vikki Orvice (The Sun) and Alex Spink (Daily Mirror) got in a cab.

“No problem sir, I will get you there vigorously,” said the driver. Hmm.

Five minutes into the drive, he had driven slower than Tiger Woods going home to yet another deaf and dumb dinner with the wife.

“Can we got a bit faster, please?” asked Alex. The driver turned round to us in the back. He was waving  the gear stick in his hand. He had just the one gear.

Welcome to working in Delhi.

The Press Centre looks as if it is equipped like any other at a big event, indentikit as, say, an Olympics, World Cup, the Open golf.

Except there is nothing in Delhi’s Press Centre. There are no start lists for events, no schedule of events and certainly no results system.

Pigeon holes there are in plenty. They are all empty.

There’s no online info. “Maybe in a few days, sir.”

We’ve been given dongles for free WiFi access. They don’t work. They need passwords and user names we don’t yet have. And so it goes on.

The  thing is, it’s hard to get angry. The Indian people are charming, smiling and as helpful as they can possibly be, as they try to implement what they’ve been handed from a chaotic system.

It’s hard to argue against that smile. Here in Delhi they want you so much to like your stay  and beam back when you have a joke with them or simply say thank you.

Even the solider, his head and his machine gun visible over his sand-bagged  sentry station outside the MPC, smiles a good morning when you say hello as you go in.

In five Olympics and the  same number of Commonwealth Games, plus athletics world championships and football World Cups and European championships, I have never known security as intense as this.

Armed soldiers are everywhere. It’s worse – or better, whichever way you look at it – than the Bejing Olympics.

As for accommodation, the Ramada Plaza is excellent, pricy for Delhi and WiFi access is £10-a-day. But the rooms are fine, even if, when I checked in at about 1am, I was given key cards to two rooms that already had people in them. It’s a quick way to meet new people.

There are “Games Lanes” on the roads – a white line with cones – but even then the traffic gets snarled. But remember, this is Delhi.

When traffic came to a stop the other day,  it was because there was an elephant in the Games Lane.

And he didn’t have a  media pass.