Myriam Cawston talks to NICK TOWNSEND of her pride in winning the SJA Sports Picture of the Year award – and how her greatest wish is that it will inspire other women photographers.

Myriam Cawston (left), acutely aware that many are called but few are chosen at the SJA’s sports journalism awards, arrived at the Westminster Plaza hotel harbouring hope rather than expectation.

The 35-year-old freelance knew her entry for Sports Picture of the Year, capturing a moment from the pairs competition at the World Figure Skating Championships in Boston, was unusual, with a touch of humour.

But had her image been sufficient to make an impact on the judges in a year of notable British achievement? Or would they decide on a photo featuring a more familiar, iconic sportsman or woman?

She needn’t have worried. Cawston’s strikingly clever picture of Swiss pair Ioulia Chtchetinina and Noah Scherer performing a throw triple twist – transforming the former’s skates and orange skirt into what, at first glance, appears to be a sunflower propelled above his head by Scherer – was named winner.

“I felt incredibly honoured because of the quality of the other photographers there, but I thought that picture was so unusual it was a valid proposition,” she says.

“I wasn’t expecting to win. I was just grateful to be nominated. I was excited to be there, and have a few conversations with agencies – which I did. So, my evening was made, anyway. The agency photographers I spoke to were very supportive and kind, and I really appreciated that.”

It was only later, when she reviewed the list of previous victors, that Cawston discovered she was the first female to be honoured in that category. Her reaction at that fact was pride – and surprise.

‘I remembered that particular skater, and her skirt, from the warm-up, so was ready for them. Sometimes people think it’s just an accident. But I know that one wasn’t.’

Cawston accepts that is due to lack of entries from a part of the industry in which women are seriously under-represented – her work was one of only four entries from female photographers out of a total of 49 in the 2016 Sports Picture of the Year category.

She said: “I hope that’s set to change. The reaction on social media (to her win) has been an awful lot of support from female sports photographers. I hope it encourages them to enter next year.”

The award winner is not a newcomer to the profession, and her journey here has taken Cawston to the far reaches of the world, including the Arctic where she has been a tour guide.

Cawston is British, although her parents lived for 40 years in France, and she was 17 when came to the UK to study. After gaining a piano degree at the Royal Northern College of Music, she worked for an NGO in Ukraine, while studying law online.

Her breakthrough with a lens came when she won a French photography award: the Prix François Chalais du Jeune Reporter. The prize included three months’ work with a newspaper in Guadeloupe, where she got some news photography experience.

She then spent time in Norway, with the Arctic Guide Service, on the island of Magerøya. It was also an opportunity to practise her photography.

Cawston’s earnings there helped her save up to complete a masters in photojournalism and documentary photography at the London College of Communication. “I was blessed to be in a year with amazing photographers, and they taught me almost everything I know.”

She adds: “After completing my MA, I was finding it so difficult finding outlets for my work, so I created my own digital magazine, called Artistika, focussing on artistic sports and performing arts. The first two editions attracted more than 50,000 hits.”

The site included an item she commissioned on the underground ballet scene in Iran. “It’s a very vibrant scene and a story worth telling, but publishing the photographer’s images was delicate” she explains.

“Showing the women in a state of dress compatible with performing ballet carried a risk. To preserve the performers’ anonymity, I transformed all of them with an app so that they became like paintings – you couldn’t see who it was.”

But a sports photography career has always been her prime focus. Enterprisingly, two years ago, she attended, as a spectator, the European Figure Skating championships in Stockholm, found an empty seat in the front row and shot photos from there.

“I was contacted by a woman who ran a website about figure skating, asking ‘Could I use some of your pictures?’ I said yes, as long as the next time round you help me get proper accreditation!” 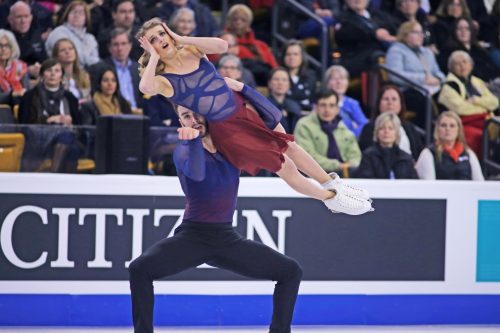 Importantly, Cawston also joined the SJA, and has found her membership of our association and that of AIPS highly beneficial in gaining accreditation to events. “The SJA has been very welcoming to me. Steven Downes (until last year, our long-standing secretary) was incredibly helpful,” she says.

Cawston, who is currently covering the World Figure Skating Championships in Helsinki, believes that knowledge of, and passion for, a sport, offers a photographer definite advantages. “It puts all the chances on your side,” she says, revealing that her winning entry was a planned picture.

“I knew they always do the throw triple twist down one end of the rink. It’s a set element. For the early skaters, the agency photographers hadn’t turned up, so I was able to get a better seat than normal. I remembered that particular skater, and her skirt, from the warm-up, so was ready for them.

“It was highly satisfying after putting that planning into a picture, something came of it. Sometimes people think it’s just an accident. But I know that one wasn’t.”

At the SJA journalism awards dinner, Cawston endeared herself to guests by declaring her wish that the win would bring more work. It raised a laugh, but was said only partly in jest. These are tough times for all freelances, and, she feels particularly so for women.

“It really is difficult for women to break into sports photography. It really is that much harder for women to get credibility with agencies, to get a pay cheque. It’s by sticking up for each other and supporting each other – that’s how we can make advances in the industry.”