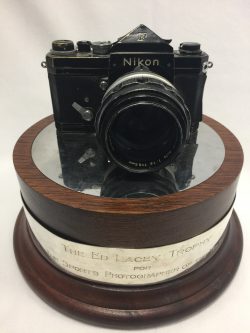 Sports photography is all about being in the right place at the right time and this year’s record entry illustrated this in all the categories, from the biggest sporting event in the world at the Rio Olympics to a Sunday morning football match on Hackney marshes.

The quality of entries in this year’s awards was of the very highest standard and it’s fair to say that the judges all agreed to disagree. The Sports Picture category was discussed at great length and we had to take a majority vote with the discussion carried over late in the afternoon.

It was a privilege to be involved in this year’s competition and congratulations to all the photographers, who displayed the wealth of talent which fills our sports pages all year round.

First, the winner of the Ed Lacey Trophy awarded to our photographer of the year, – Alex Livesey of Getty Images. Livesey was also the winner of the Sports Portfolio category with the judges saying: “A marvellous variety of different sports showing the photographer’s all-round skills and ability with ten very strong pictures.”

Highly commended were David Davies of the Press Association and Dylan Martinez from Reuters.

The Football Picture category was only introduced in 2015 and last year’s winner, John Sibley from Action Images and Reuters, was highly commended along with Phil Noble from Reuters this year. But the winner was The Sun’s long-serving Richard Pelham, who captured an “acrobatic eye-catching moment of concentration from Joe Hart in this decisive moment during Euro 2016.”

To the Sport Picture, won by freelance Myriam Cawston for a “highly unusual picture which stood out for being different.” Gloucester Echo’s Mikal Ludlow and Bob Martin of Silverhub Media were highly commended.

Alan Crowhurst, 2015 Sports Photographer of the Year, won the Specialist Sports Portfolio for the second year in a row as he once again displayed his comprehensive knowledge of the sport of racing.

The judges said: “This portfolio stood out from the crowd. The photographer has demonstrated his ability to capture not only newsworthy action, but something different at the same time. The ten pictures also show high technical skill with subjects ranging from the most important days of racing including The Derby, to quiet moments from training on the gallops.”

A special mention went to Eddie Keogh of Reuters, highly commended for a brilliant essay on Sunday morning football, and Edward Whitaker.

Who can forget the Rio 2016 Olympics, set in the dramatic and beautiful Rio de Janeiro? The backdrop proved inspirational for our entrants in the Rio 2016 Portfolio, especially SJA 2016 winner Clive Mason of Getty Images.

The judges said: “A stunning selection of sailing pictures taken under extremely difficult conditions that showed the photographer at the top of his game.”

Laurence Griffiths and Kirsty Wigglesworth were both highly commended.

Rights-free images from today’s SJA British Sports Journalism Awards are available upon request. For media or general enquiries regarding the SJA contact:
Nick Townsend on 07801183766 or nick.townsend@virgin.net
James Green on 0208 916 2493 or james@s2fevents.co.uk