PETER JACKSON, chairman of the writing judges, reports on a gala occasion to celebrate the Oscars of British sports journalism on a night when all the right winners came out of the right envelopes.

Paul Hayward is the 2016 SJA’s Sports Writer of the Year and the Daily Mail the Sports Newspaper of the Year.

The Telegraph’s leading sportswriter, who won his first title 21 years ago, is now a four-time winner of the John Bromley Trophy.

The same panel, widened from the previous year to ensure a spread across the entire sporting spectrum, chose the Mail for the fourth time in a row.

Matt Dickinson of The Times is Sports Columnist, Sean Ingle of the Guardian and Observer is Specialist Correspondent, Daniel Taylor of the Guardian/Observer has won Sports Scoop of the Year and the Telegraph’s Oliver Brown is Sports Feature Writer.

Taylor also won the Ladbrokes Football Journalist award for the second  year in succession and was recognised with the other winners at a gala occasion at the Westminster Park Plaza tonight.

Paying tribute to Taylor’s scoop for the football paedophilia scandal, the chairman of judges said: “It is a powerful story, brilliantly and sensitively told, with consequences far beyond the sport itself.”

The judges praised Brown for his “fresh insight presented in fascinating interviews with Rory McIlroy, Eddie Jones and Usain Bolt”. His achievement is put into context by the names of the highly commended – Hayward and Martin Samuel.

The fifth first-time winner puts a famous old name on the roll of honour – Boxing News. In what was a desperately close-run thing, they won the Special Sports Edition award for their tribute to Muhammad Ali, pipping the Sunday Times.

The Oxford Mail’s celebration of the Milk Cup Victory 30 years on and the Racing Post’s The Big Kick Off were also highly commended.

The judges described Boxing News’ coverage as “compelling reading, full of detail and insight. Great journalism from a specialist publication.”

Lawton is rapidly turning the Sports News Reporter category into a case for the Monopolies Commission. He led the field, day after day after day, with a series of exclusives on the Team Sky cycling scandal.

His exposure of the cover-up of the jiffy bag delivered to Bradley Wiggins and relentless pursuit of the story thereafter amounted to a scoop in the finest tradition of the word. We really ought to have given him a yellow jersey.

The Telegraph specialist team won the Investigative category for their ‘Football For Sale’ exclusive which forced Sam Allardyce to resign after one match as England manager. Stories do not come much more startling than that.

Nor are they confined to what used to be Fleet Street. Jon Colman of Cumbrian Newspapers has been breaking big stories season in, season out and is to be congratulated on retaining the Regional Sports Journalist yet again.

Some achievement given the challenge from Mark Douglas of NCJ Media in Newcastle and Chris Wathan of Media Wales in Cardiff.

Michael Atherton appears to have made the Cricket Journalist award his own – he has won it all three times since its inception. Highly Commended are Vic Marks, Mike Selvey and Rob Smyth.

Last year was Olympic year and Rio 2016 brought out the best in the Telegraph and The Guardian/Observer for their coverage, both highly commended in the Multi-Media Sports Package but the winners were Sky Sports, for its coverage of The Open.

The judges said: “The winning entry showed lots of fresh, innovative ideas and fine use of all aspects of media – especially the use of phone video.”

The Guardian did win Sports Website, however, with Mail Online and BBC Sport also highly commended.

Stephen Jones of the Sunday Times pipped Mail on Sunday’s Sam Peters and Owen Slot of The Times to the Rugby Journalist Award.

The name of Ian Wooldridge lives on in the SJA with his name given to the Young Sports Writer, this year won by Sam Dean of The Telegraph with Teddy Cutler from Newsweek International and Jack Gaughan of the Daily Mail highly commended.

The judges said that the winner’s work “displays great skill and authority – from a front page splash to a Rugby League match report, his quality shines through.”

Katie Smith of Leeds University scooped top prize with the judges saying: “The winner emerged as a writer who combined lyricism and riveting detail to take you down to the riverside for the eventful 2016 Women’s Boat Race. By the time she’d finished with us we felt we’d been in one of the pubs along the Thames watching the whole thing first hand.”

It was certainly a vintage year in the finest, old-fashioned tradition of sports journalism. Expose after expose leapt out and grabbed the reader like grappling irons.

The arch exponents of those who told us something we didn’t know and kept telling us on an almost daily base have been given due recognition and the world of sport owes a debt of gratitude. 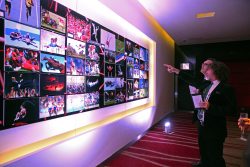 We live in volatile times of ever-intensifying competition. The entry list for the 2016 awards reached an all-time high, not far short of 250.

Regrettably very few came from the Sun and Mirror. There is a disconnect and disillusion amongst some which has to be resolved. We will continue to reach out to bring both papers back fully on board.