Nancarrow promised to keep us up to date with his training regime, although he did warn that he had two dodgy knees and a shrivelled kidney before he started.

THIS IS HIS LATEST BULLETIN

Don’t let anyone tell you that training for the marathon doesn’t hurt. These pictures prove the pain I suffered crossing the finish line at the Surrey half-marathon on March 12. 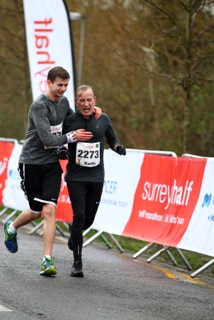 Doesn’t seem to have been quite such a struggle for my giggling son, but then he is 30 years younger and did run it nearly 20 minutes slower than the year before.

Max stayed with his old man all the way to help him to the finish line and I was truly grateful.

The pain was real but then we did manage a sprint finish and I was delighted to clock in officially at 1hr 55.48. The sobering thought is I have to do that twice…..

So it’s been back to training hard in the two weeks since while trying to manage a few niggling injuries. I’ve clocked up an 18-miler but now my knees are starting to protest quite strongly.

The only surprise is they didn’t complain earlier and an ageing body just isn’t used to this sort of workload.

The constant worry is are you doing enough miles without risking a serious injury that would prevent you lining up at the start on April 23? I’m about to find out.

There are just two weeks of hard training to go, then tapering down towards the big day.

What keeps me going is the thought of the cash we can raise for the Royal Marsden cancer hospital, made all the more poignant by the recent death of friend’s wife who received treatment there.

If you would like to show your support for me and the Royal Marsden, please sponsor me at: http://uk.virginmoneygiving.com/KeithNancarrow

Many thanks, especially to those who have already donated.