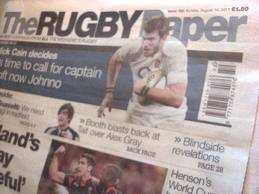 The Rugby Paper, the Surrey-based weekly that was launched by former SJA chairman David Emery three years ago, has bought rival title the Rugby Times, with the World Cup kick-off in New Zealand just weeks away.

The Rugby Times, which launched in 2002, was due to return to publication after its summer break this Friday, with a World Cup preview special.

But in a statement to subscribers posted on the magazine’s website yesterday, Martyn Sadler, the chairman of owners League Publications Ltd, announced: “The Rugby Times title has been sold to The Rugby Paper and the two weekly rugby union newspapers will merge under the banner of The Rugby Paper with immediate effect.”

League Publications, based in Brighouse, West Yorkshire, also publishes Rugby League Express every Monday and the monthly Rugby League World, neither of which are affected by the takeover.

The Rugby Times‘s two editorial staff, editor Jon Newcombe and Neil Harvey, will, according to Emery, both be offered work with the newly merged title.

Rugby Times claimed a 20,000 circulation, but the title was known to have suffered problems with distribution in the past year, while advertising sales had struggled in the recession. Subscribers are to be invited to transfer their allegiance to The Rugby Paper ahead of the World Cup and new domestic season.

“I don’t think we had as good a distribution system as the Rugby Paper,” Sadler told sportsjournalist.co.uk, “and what we found was that more and more fans were getting their information from the internet or mainstream media.”

Sadler compared the coverage of rugby union and rugby league in the national press, to suggest that his company’s two remaining titles, published in league’s northern heartland, have a stronger niche market.

The Rugby Paper has a circulation of 15,750, a 30 per cent increase year-on-year. “We had a couple of weeks last season during the Six Nations when we sold more than 20,000,” Emery said, “and we hope that if the home countries go well during the World Cup, we can approach that figure more often this autumn. Clearly, acquiring Rugby Times will help us towards that.

“It’s a shame that Rugby Times has had to close – it was a nice paper, and we always believed that there could be space in the market for a weekly match reports paper like ours, and a preview paper published before the weekend like Rugby Times.

“Like our other publication, the Non-League Paper, we are a niche product which covers not just elite rugby, but goes all the way down the leagues, and we think that appeals to a lot of dedicated players and fans of the sport.”

For more news on rugby coverage and the Rugby Writers’ Club, click here