Imagine if after winning a medal at the world championships in Daegu, Dai Greene packed his bags to head off to  play for Wales in the rugby World Cup, where he would score the winning try against New Zealand. Sixty years ago, that was the kind of feat that Ken Jones achieved

STEVE LEWIS is the author of a new biography of Jones, who he argues deserves the title of the Greatest Welsh Sportsman of all-time

Who deserves the title of “Wales’s Greatest Sportsman”? In football, few would argue that John Charles should be at the top of any list. In boxing, the recent exploits of Joe Calzaghe would probably see him get the vote ahead of Tommy Farr, Howard Winstone or Jim Driscoll as Wales’ finest.

It is inconceivable that Gareth Edwards will ever be challenged as Wales’ greatest rugby player. And Colin Jackson would surely come out top of those considered from the world of athletics, with Lyn Davies challenging him hard. Then there is Wilf Wooller who led Glamorgan to their first cricket county championship in 1948 as well as captaining them for 14 years. He also won 18 rugby caps as a centre. Cyclist Nicole Cooke won the Olympic and world championships road race titles in 2008.

There are many others who could be added to the list. Yet in determining the answer to our question, we must surely look beyond the parameters of individual sports.

And that would mean that we should declare Ken Jones the winner and move on. But why should the man from Blaenavon be placed above all others?

Jones was a rugby player and a sprinter. It would be foolish to suggest he was a better player than Edwards or a more accomplished athlete than Jackson, but across the two sports his record is unequalled.

Jones, who died, aged 84 in 2006, was born in Blaenavon in 1921. As a flying wing, he made his Wales rugby debut in 1947, having been stationed in India with the RAF during the Second World War. He played in the Five Nations championship each year from 1947 until 1957. He played a total of 44 internationals, scoring 51 points. His international athletics career spanned six years.

When he won his 43rd Welsh cap Jones became the world’s most capped rugby player. He toured with the 1950 British Lions to great acclaim. And when Wales last defeated New Zealand, in 1953, it was Jones who scored the winning try.

On the track he won 16 Welsh AAA titles. He was presented with a gold medal at the 1948 Olympic Games before having to settle for silver. He won an individual bronze in the 220yds at the 1954 British Empire and Commonwealth Games. Later that year, he won another silver at the European championships when he was also captain of the Great Britain men’s team. And there was much, much more, not least a later career as an athletics and rugby writer for the Sunday Express. 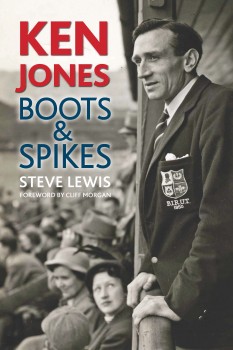 No other Welsh sportsman can lay claim to such achievements across two sports played at the highest level – nobody even gets close. Which is why there can be no argument that Kenneth Jeffrey Jones’ name should not only be seen in print when Wales prepare to take on the All Blacks, but remembered wherever like minded people gather to celebrate everything that is great about Welsh sport.