Brian Moore, the BBC rugby commentator and Daily Telegraph columnist, yesterday was handed a £22,000 bonus, as his autobiography, Beware of the Dog, was named winner of the William Hill Sports Book of the Year. 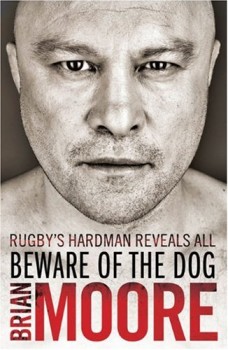 It is the second autobiography for the former England and British Lions hooker, whose previous volume was written with the Sunday Times rugby correspondent Stephen Jones. But this version is far more personal, including from the first chapter revelations of sexual abuse in childhood.

The judges’ selection seems to fit a pattern: it comes just two years after the winner of the “Bookies’ Prize” was Marcus Trescothick’s Coming Back to Me, which discussed the depression that ended the Somerset batsman’s international career.

The announcement, made at Waterstone’s in Poccadilly yesterday lunchtime, left Moore emotional.

“No rugby victory ever brought me to tears,” said Moore, who played in 64 internationals, being part of three England Grand Slams. “I’m astonished to have won having seen the quality of the authors.

“On a different day any of those books could have been chosen instead of mine and I’m well aware of that.

“I find it very difficult coming from a world of sport where you objectively win or lose. You don’t have to be popular or nice to people as at end of the day you can point to the scoreboard and say I’ve won and that’s the end of it.

“It’s been very difficult for me adjusting to a world where opinions are all equally valid.

“More than anything the fact that I’m still around to tell the story is a testament to people who helped me at times when I didn’t necessarily deserve help but they managed to stick with me and I hope in some way I have done them justice with the way I have covered them in the book.”

Moore’s autobiography is something of a rarity in the sporting world, since it was genuinely self-written; Agassi’s ghost writer was Pulitzer Prize-winner J R Moehringer. Moore, a solicitor by training, has said that the writing process was cathartic, helping him to at least begin to address the issues that made him relish violent conflict on the field as well as wreaking havoc in his private life, including the break-up of his first two marriages.

Publishers Simon & Schuster responded to the news by  bringing forward paperback publication of Beware of the Dog to next week, two months ahead of the planned date in February next year.

For Anton Rippon’s review of Beware of the Dog, posted in January, click here

Read Frank Keating on the 50th anniversary of another rugby book