ANTON RIPPON on the revival of a weekly Pink ‘Un in the west country (albeit published on Mondays), and the latest ban on reporters from the press box

It has been a funny old week in sports reporting. First the good news: sister daily papers The Citizen, based in Gloucester, and the Cheltenham-based Gloucestershire Echo have launched a sports supplement, making that three such publications rising up from the ashes of the Green ’Uns and Pink ’Uns of blessed memory in recent weeks. 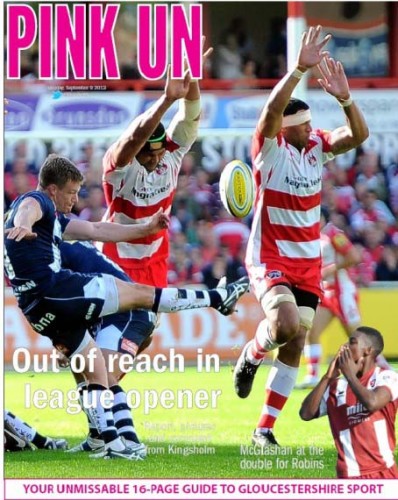 In July we reported how the Portsmouth Sports Mail had been relaunched after what Johnston Press described as “the outpouring of emotion from readers” about the Saturday night paper’s demise.

And now we have a new weekly sports publication in deepest Gloucestershire. Titles owned by Local World – that’s the newspaper business merger between the Mail and Mirror groups – The Citizen and Gloucestershire Echo’s 16-page Pink ’Un will cover Gloucester rugby, League Two club Cheltenham Town, and Forest Green Rovers and Gloucester City among its non-League coverage. It will also include fans’ views, analysis and opinions as well as having its own Facebook page and Twitter account at @GlosPinkUn.

Jenny Eastwood, editor of The Citizen, told the HoldTheFrontPage website: “We are really excited about our new Pink ’Un supplement as we know just how much sport means to our readers. There is so much fondness for the old Saturday afternoon Pink ’Un in the county.

“We chose to bring back the name for our modern 16-page supplement because it symbolises the level of passion for sport in this county from fans and also our own commitment to provide great analysis and round-ups for our readers. We are encouraging fans to not only buy the paper for the supplement each week but also send in their views on the games via social media.”

The new supplement will be inside The Citizen and Gloucestershire Echo every Monday. That giant of sports journalism, Frank Keating, might not have been entirely satisfied then. Writing in The Guardian in 2006, in the wake of the Bristol Evening Post’s Green ’Un’s demise, Keating said: “Even in my boyhood’s cuddly Cotswold village of the 1940s, us foot-stamping addicts would gather in the after-tea gloom at Stonehouse post-office, expectant for the van with the Citizen Pinks from Gloucester … ”

In the meantime, sportswriters at any of the above beware. If you are allocated a seat in Nottingham Forest’s press box at the City Ground and don’t subsequently file a match report – well then you won’t be welcome any more.

Forest has banned journalists from The Guardian and The Observer, although the enforcement order has been a long time in coming. The East Midlands club apparently took umbrage as long ago as last March when The Observer’s chief football writer, Daniel Taylor, attended a game against Wolves at the City Ground but then had the audacity not file a match report.

Last week, presumably after a long period of reflection, Nottingham Forest issued a statement on the club’s official Twitter account: “On 15 March 2013 the club identified the possibility that DataCo regulations had been breached. The DataCo regulations allow journalists to obtain free tickets for professional purpose. The club sought clarification and explanation from the newspaper concerned but no satisfactory response was received. Because of this breach a ban is in place.”

In his Observer column at the weekend, Taylor said: “It is what a football correspondent does: watch games, meet people, see the managers, get information … Forest says it broke their rules to sit in the press box and not write a match report. They won’t explain why it has never been a problem before. Or why, seeing as it is common practice, we are not banned from 30 or 40 other clubs.”

Taylor said that another journalist – an unnamed freelance who had covered the club for 40 years – has also been banned and the club’s local paper, the Nottingham Evening Post, “has been ostracised”.

Taylor suggested that Forest director Jim Price –­ who he described as “effectively Forest’s chief executive” – had been “picking off” sportswriters suspected of having ties with the previous board that sacked the current Forest manager, Billy Davies.

Guardian sports editor Ian Prior told Press Gazette: “While newspapers do fall out with clubs from time to time and incur bans, it’s possibly unique to be banned from a ground for going to a game.”

As Jimmy Greaves might have said, “Funny old game.”