The last time England won the World Cup (ok… the only time) Greg Dyke was a stringer selling fillers about Brentford to me on the Daily Express as “Dyke of Uxbridge”.

He disappeared off my radar screen, to remerge as “Dyke of LWT”, masterminding the groundbreaking Six O’Clock Show after earning himself a BA in politics as a mature student at York University.

Next he was brought in, along with Roland Rat, as saviour of the ailing TV-am, when I was representing a rejuvenated Jimmy Greaves. I took Greavsie along to Egg-Cup Towers (more like Ego-Cup in the days of “The Famous Five”) to try to sell Jimmy to Dyke as a Voice of Football for the crisis-hit company.

Off the top of his balding head, Dyke said to Greavsie: “What d’you know about television?”

“That’s good enough,” said Dyke. “You can be our television critic.” 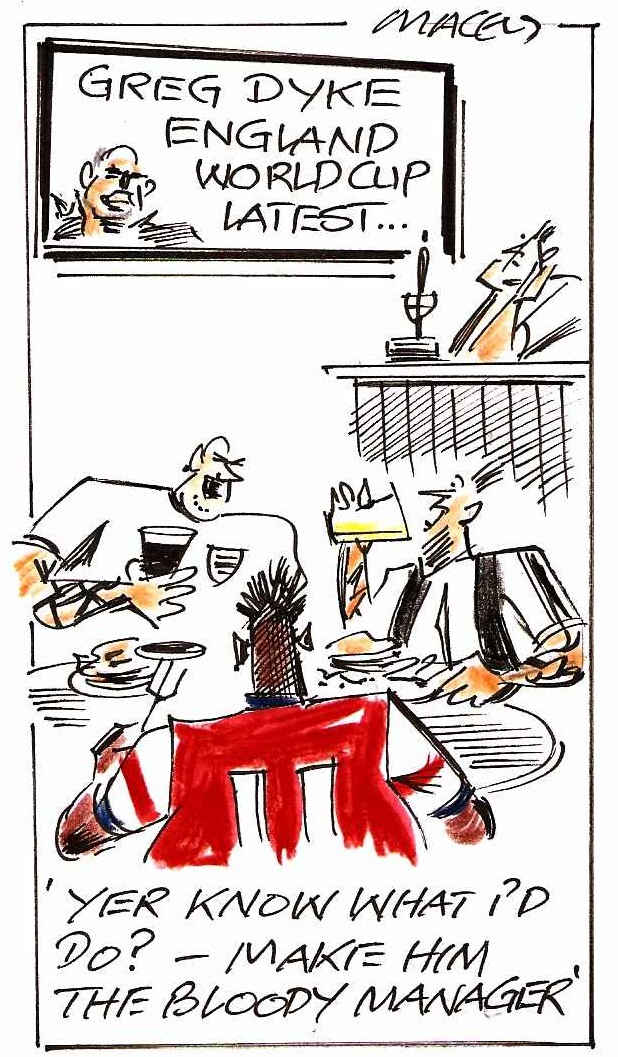 And that was how Greavsie’s television career started in 1983, leaving me wondering about the sanity of Dyke of Uxbridge.

But his mad idea worked, and Jimmy was up and running as a complete natural in front of a TV camera. Greavsie’s long-running partnership with The Saint worked because of the foundation he laid at TV-am.

So when Dyke, having morphed through several high-profile posts to chairman of the Football Association, set a target for England to win the World Cup in 2022, I did not join those who were falling about laughing at the lunacy of the idea.

Instead of picking holes in the Dyke scheme, I hope all sports journalists get behind him and try to find ways to make it work.

Don’t waste time trying to see what’s wrong with it, hurt your brain to see how it can become more than a dream.

It depresses me to see so few home-grown players getting a chance in our Premier League. Many of our major clubs are now owned by foreigners, and we are watching foreign players coached by foreign managers.

It’s all become foreign to me.

When the commission being set up to consider Dyke’s idea finally sits, I hope they consider what Hungary achieved in the 1950s with a team called Honved.

It was a thinly disguised Hungarian national team, with links to the army. On the football pitch, Major Ferenc Puskas was more like a field marshal.

How about setting up an England club team of all those promising young players who at the moment only get to warm the substitutes bench, and have them play friendlies against the top Championship sides – all ticket money to go to a football charity?

It would give Roy Hodgson the chance to work on team tactics, and the players the opportunity to get to know each other with the sort of club spirit that Alf Ramsey created for the 1966 World Cup heroes.

I can think of a score of things that are wrong with this idea, but try to think of what is right with it and get it to work.

FOUR DOWN, Three to go. The Insignificant Seven has lost another member with the passing of the inestimable Steve Richards at the age of 84.

Our club was formed in the 1960s, when Brian James – then a hugely significant football writer on the Daily Mail – was overheard saying, “The No2s on the nationals today are such an insignificant lot.”

The Insignificant Seven club was born, with Brian as our President. Harry Miller (Daily Mirror), Bob Oxby (Daily Telegraph), Byron Butler (Telegraph/BBC) and now Steve have gone to the great press box in the sky.

That leaves Brian Scovell (Daily Sketch and Mail), Peter Corrigan (The Sun, Mail, Observer and Independent on Sunday) and little old me.

We started to break up when too many of our members got ideas above their station and became too significant. Corrigan, for example, brought shame on the club by accepting the role of sports editor of The Observer.

A disciplinary meeting is still waiting to be set up to demand that Peter, in the role of club treasurer, pays the remaining members the interest on the 17s 6d that was in the kitty when he became too big for his boots back in the 1970s.

The rest of our kitty money was spent on Insignificant Seven club ties that were manufactured by Dave Mackay’s company. If Dave offered to do business with you, it took a brave man to say no.

I shall wear mine at the funeral of dear old Steve Richards, despite him having abused the insignificance of our club by working for several years as representative for that fairly significant footballer who answers to the name of Pelé.

Steve was a top-flight reporter who was like a bulldog when chasing a story and would never give up until he had it nailed. He was out of the old school of journalists, conscientious, well-connected and always chasing headlines and deadlines.

He was driven (sometime to distraction) by a fellow Derbyshire powerhouse in Frank Nicklin, who was his boss on both The People and The Sun. For many years Steve provided Frank with some of his best back-page leads, and I always found him a friendly yet fierce rival who would have kicked his granny for a scoop.

The last time I saw Steve was at the funeral of a giant of sports journalism, Bob Findlay, former Daily Express and Daily Mail sports editor. They were both housed at the wonderful Dorking retirement home for journalists enjoying the last of the summer wine.

We chatted about his granddad Steve Bloomer, arguably the greatest British footballer of any time.

My parting words to him were: “Steve old friend, there was one thing wrong with you.”

He waited for the punchline, knowing I had never been serious with him throughout our reporting days together. “You became far too significant.”