The Injured Jockeys Fund has begun its 50th anniversary celebrations by publishing a book on its history, as ANTON RIPPON reports

When jockey Paddy Farrell suffered a career-ending fall in the 1964 Grand National, there was so little help available to help him in the aftermath of the injury that a small group of leading jump people ¬– including the great jockey Fred Winter, and racing journalist and amateur rider John Lawrence (who was to become Lord Oaksey) – set up a fund to help Farrell and former champion jockey Tim Brookshaw who, four months earlier, had broken his back. 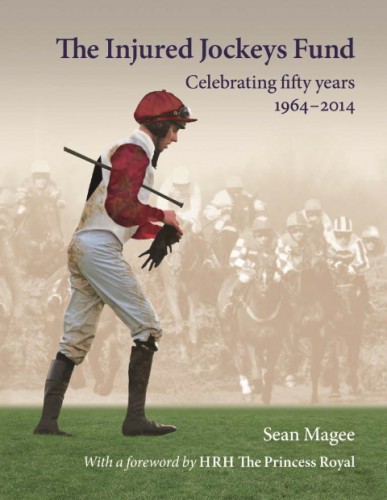 From that impromptu beginning grew the Injured Jockeys Fund, an organisation that has helped more than 1,000 beneficiaries and spent millions of pounds improving the quality of life for stricken jockeys and their families.

This month, the Fund embarks upon an 18-month programme of activities and events to celebrate its 50th anniversary in 2014, all launched around the publication of a new book The Injured Jockeys Fund: Celebrating Fifty Years 1964-2014 by racing author Sean Magee, whose other works include Ascot: The History (2002), Lester’s Derbys (with Lester Piggott, 2004) and Arkle: The Life and Legacy of “Himself” (2005).

In her foreword to Magee’s new book, Princess Anne writes: “In telling that inspiring story, it celebrates the tireless efforts of a group of dedicated men and women and the wide range of activities that keep this charity moving forwards, not least through major initiatives such as Oaksey House in Lambourn – named, of course, after the late John Oaksey, who was so important to the Injured Jockeys Fund from the beginning – and Jack Berry House, soon to be built in Malton.”

The book contains some wonderful illustrations such as John Oaksey making a bungee jump to benefit the Fund which was so close to his heart, and the Queen Mother (patron of the Fund before her granddaughter) lending a helping hand with the IJF’s now famous Christmas cards which, to date, have raised more than £4 million. All 50 of the Christmas cards are reproduced in the book, providing a fascinating journey through the names, faces and races of the last five decades and highlighting their importance at the heart of the Fund’s fundraising efforts.

There are also many amusing anecdotes and snippets of some strange fund-raising efforts that include profits from mounted carol singing, Des O’Connor’s appearance money, and money in lieu of a billy goat’s stud fee.

Lisa Hancock, CEO of the Injured Jockeys Fund says: “We wanted to have something tangible that tells the incredible story of the last 50 years and the people and events that have helped the Fund to evolve along the way. This launches a programme of activities throughout next year that we hope will be supported by every racecourse in the country with the aim of continuing to raise awareness of the vital work we do to help injured jockeys and their families.”