Michael Vaughan has completed the gruelling 462-mile PruProtect Chance to Ride charity bike ride after a night ride from Southampton to London this morning. 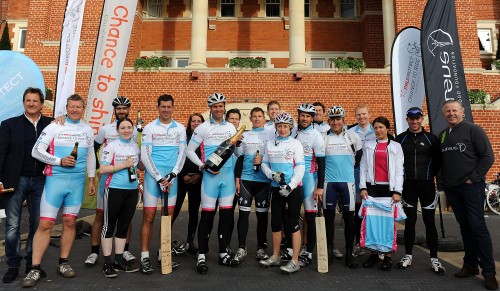 The former England cricket captain, now BBC Radio pundit, was joined on the final 70-mile stage from Southampton to The Oval by fundraisers and celebrity supporters including Tim Henman and Jamie Redknapp, who have raised thousands for the Laureus Sport for Good Foundation and the Cricket Foundation’s Chance to Shine initiative.

Local school children welcomed the peloton as it arrived in the early hours. It had followed the England v Australia one-day international series, travelling to each of the venue.

Vaughan, who guided England to Ashes victory in 2005, said: “It’s going to be a long long time before I want to see a saddle again. The Chance to Ride has been everything I expected it to be – tough, exhilarating, inspiring and great fun.

“We’re raising a lot of money for Laureus and Chance to Shine, two great causes and it will all be worth it for the kids who get to play sport or get other opportunities thanks to the funds we have raised.

“I’d also really like to thank the fundraisers and friends who joined me, including Andrew Strauss, Victoria Pendleton, Jamie Redknapp and Tim Henman.”

Henman, who watched the final ODI before taking part in the night ride, added: “As a Laureus Ambassador, I was delighted that Michael invited me on Chance to Ride and although it was a challenge, I really enjoyed the night ride to London.

“This event has had great support since it started 12 days ago an d Michael deserves a lot of credit for making it happen and getting us all together to help raise funds for disadvantaged children.”

Laureus World Sports Academy Member Sean Fitzpatrick was also at The Oval, welcoming the returning riders. He said: “It was a great feat by all the riders and I would like to congratulate them for their support on this initiative. Michael Vaughan and his fellow Ambassadors have made a superb contribution to Laureus and Chance to Shine during the Ride.”

Both the Laureus Sport for Good Foundation and the Cricket Foundation’s Chance to Shine initiative use sport to aim to improve children’s lives through the power of sport by providing coaching, education and equipment and instil sporting values.

The Laureus Sport for Good Foundation uses sport as the means to combat some of the world’s toughest social challenges facing young people today such as juvenile crime, gangs, gun and knife violence, HIV/AIDS, discrimination, social exclusion, landmines awareness and health problems like obesity. Since its inception, Laureus has raised over €60 million to support its work around the world.