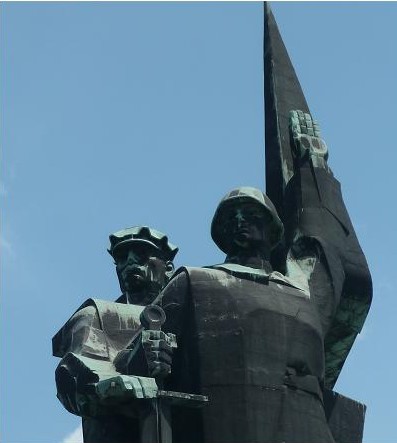 DONETSK DIARY: Covering Euro2012, KEIR RADNEDGE has noticed some intriguingly Orwellian perspectives on the past, present and the future in Ukraine

A mighty, jagged war memorial stands close to the Donbass Arena. Cast in matt black, representing the region’s wealth in coal, it depicts a Red Amy Soldier joined together with a miner. They share gun and shovel and the soldier has his hand raised in a gesture declaring: “This far and no further.”

Interpret the gesture how you may: representing the physical fact of the Red Army stopping and ultimately turning around Hitler’s Nazi armies; representing the concept that such horrors must not be repeated.

Millions died in the Donbass basin in Ukraine, mostly between 1941 and 1943. A museum which curls down beneath the mighty memorial portrays the privations, horrors and ultimate outcome in case after case of pictures, old photographs, armaments, uniforms, regalia and other wartime relics.

Apart from a couple of English-language audio displays all the labelling of the exhibits is in Russian and there are no multi-lingual leaflets. You have to be Russian to get the full force of it all: perhaps that is the point.

Outside the museum is a row of tanks on display. Children run around them and are photographed by their parents, sitting atop the gun turrets.

Behind them to the right sits the magnificent, glass-glad Donbass Arena itself which is a Euro 2012 venue. This was built three years ago and was funded by multi-millionaire Rinat Ahmetov, one of the post-Communist oligarchs, and owner of host club Shakhtar Donetsk, the miners’ club.

Behind the tanks to the left rises the magnificent, western-opulent Victoria Hotel Center replete with outside bars, restaurants, manicured lawns and tennis courts. It has been enjoying munificent trade from our colleagues, and other international visitors, over the past couple of Euro weeks.

Not that the service is up to western standards. The idea of smokeless zones in restaurants has not progressed this far east and the starch-uniform waitress had to be prompted for a drinks list to match the menu. The meal was tepid and had to be sent back.

Tell the young people here these and other stories and they laugh: “Soviet mentality.”

As the former Soviet nations build a new identity so the growing pains are writ large: the Timoshenko issue is but one example.

Out beyond the Donbass Arena the old, tenement blocks and dusty parks stand side by side with new Mitsubishi-Ukraine car showrooms. New and old worlds are colliding; the “warfare” is economic and social. Progress is painful and will be difficult.

No good pretending otherwise, as politicians like to do.

One masterly piece of pretence is visible – or rather, not visible – in the museum below the magisterial war memorial. The visitor walks past row upon row, case upon case, frame upon frame of portraits and photographs: field marshals, generals, colonels, airmen, victors . . . and victims.

Nowhere, anywhere, is there a picture of the man who both allowed the Soviet Union into the war and who led it out: Stalin.

We rewrite history at our peril. All of us.