Whatever happened to that wonderful Sri Lankan spin bowler, Pradeep Mathew? You must remember him. His star flashed briefly across Test cricket in the late 1980s and early 1990s. He achieved some superhuman bowling feats. Then he disappeared.

Fear not, the retired Sri Lankan journalist, W G Karunasena, is on the case. He’s going to track down Mathew.

You don’t remember Karunasena either? You must do. He’s 64 now. Always liked a drink. In fact, he’s an alcoholic. Which is probably why he’s dying.

You don’t remember any of this? Maybe that’s not so surprising. Mathew and Karunasena don’t exist. Well, they do, but only in the imagination of the brilliant young Sri Lankan writer Shehan Karunatilaka, hitherto a writer of advertisements, travel stories, rock songs and basslines.

And now the author of a truly remarkable novel, Chinaman: The Legend Pradeep Mathew.

Over the years, many have tried to combine sport and fiction. Few have succeeded in doing it successfully. Karunatilaka, however, has managed it brilliantly.

Chinaman is mostly about the boozed-up journalist trying to find Mathew, with whom he has become obsessed, largely because not only has the cricketer apparently disappeared from the face of the planet, he now appears not to have existed at all. Everything about him has been deleted from the record books. It’s as though Karunasena has dreamed it all through a haze of arrack. It’s certainly all most disturbing. 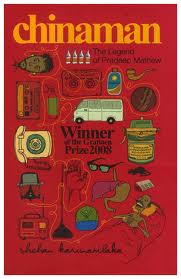 On his quest, the journalist encounters some bizarre characters including a six-fingered cricket coach and a Tamil warlord who operates from a secret bunker below a famous stadium.

There are some very thinly-veiled characters like the beefy cricketer, Tony Botham, and the Turbanned Indian Commentator who quickly becomes “TIC”.

The novel is set against a backdrop of Sri Lankan society. One of Karunasena’s friends is a diplomat who may harbour a grubby secret involving little boys. And, of course, there is a bomb exploding at a railway station, an event that is mentioned as almost incidental to what really matters.

And it is the cricket that matters most, although author doesn’t think much of the game, it seems. At least he pulls no punches when it comes to commentators who are universally reviled, cricketers whose brains are in their jock-straps, some very loose women who hang around the game (and are probably on the game), and money, money, money. Sounds familiar.

Chinaman has been described as “the Great Sri Lankan Novel”, and by Sri Lanka’s 2008 Gratiaen Award judges as “one of the most imaginative works of contemporary Sri Lankan fiction”.

I wouldn’t know about that. I can say that this is a brilliant work of fiction that has blended – or at least mirrored – non-fiction into its pages. I should think it would entertain almost anyone interested in cricket, especially cricket on the sub-continent. Wonderful stuff.

Chinaman: The Legend Pradeep Mathew by Shehan Karunatilaka was published in English by Random House in paperback (£15) last year and is being reissued as a hardback (£16.99) in June