Football reporters from all of Britain’s national newspapers will be cursing The Guardian‘s obsession with the wonders of modern technology and its journalistic potential, says KEIR RADNEDGE 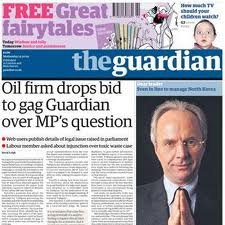 On Wednesday night, The Guardian‘s Kevin McCarra was denied entry to Elland Road to cover Leeds United’s FA Cup replay against Arsenal. Leeds’ owner Ken Bates had taken exception to a series of articles in which McCarra’s colleague, David Conn, had sought to plumb the unfathomable depths of the club’s ownership.

“Leeds have told the Football League that no individual has more than 10 per cent of the club and so they don’t have to identify any of the stakeholders,” said an explanatory, foot-of-the-page story. “The league have accepted that. So, the public still doesn’t know who owns Leeds United. We would like to report Leeds’s games in the normal way. But we, and others, won’t stop asking that question.”

So, did The Guardian ignore the game?

Did it run a couple of basic-fact paragraphs gleaned from the Press Association?

Did it leave a large white, protesting space on the front page of the sports section where the Leeds-Arsenal report should have been?

McCarra sat in front of a television and produced his usual, sparklingly thoughtful match report … accompanied by a dramatic 7in x 9in picture (from Empics) of Robin Van Persie celebrating a goal… plus another huge picture (Getty Images) on page 3… plus match quotes… plus a 800-word piece by Barney Ronay (also watching various screenings).

Many readers might have thought that, in reacting so generously to the banning order, The Guardian had reported the game in an abnormally extended and over-the-top manner rather than “in the normal way”.

Other readers – with no love of Leeds or Arsenal or football – would have skimmed past it all without having noticed anything awry and would thus have remained ignorant of this latest threat to the freedom of the sports press.

Whether The Guardian will ever go to the expense of sending McCarra to a real, live football match again is a question to ponder.

If he can produce such a magnificent piece of match interpretation by sitting in the warmth without the need for travel, subsistence and accommodation costs, then think of the savings if he were assigned to write up every match off TV.

Why send him to Premier League games or much more costly Champions League ties or even monstrously expensive World Cups and European championships?

Indeed, why stop with football? The Guardian‘s rugby, athletics, cricket, tennis and golf correspondents could all be told to stay home and report off the box.

Revolutionising the sports department’s budget would surely mean Brownie points for someone and an in-house award from editor Alan Rushbridger.

Why stop with The Guardian, in fact? The light will have popped on for editorial accountants on every other national newspaper.

Let’s go further: London’s Olympic organisers have far more accreditation applications than they can satisfy for 2012: Lord Coe could reject all the national newspapers and send their sports editors a few TV licence gift vouchers by way of consolation.

As for Leeds United, if Ken Bates can assure his club such impressive media projection by banning just one newspaper, consider how much he could achieve by banning the lot?  I dare say it’s often crossed his mind.

Seriously, one role of newspapers is to expose cover-ups. In my opinion The Guardian – of all papers! – covered up for Leeds.