When the latest book for review dropped through ANTON RIPPON’s letter box, he was not keen. But Paul Winslow’s account of life with England cricket’s Barmy Army won him over

Let’s get a couple of things out of the way. I dislike books about sport written from a fan’s perspective. I blame Nick Hornby. Fever Pitch encouraged a whole genre of fan books that were, unlike Hornby’s masterpiece, for the most part utterly self-indulgent and too often badly written. 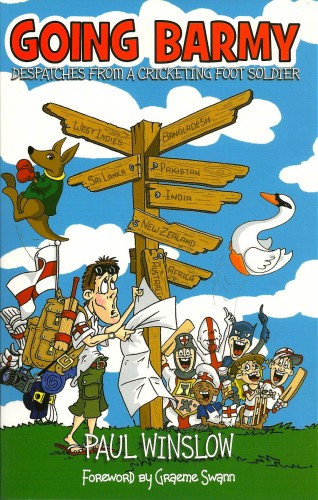 Then there is the Barmy Army. They were why I stopped going to Test cricket. It was the England-India match at Trent Bridge in 1996 that finished me off. Call me old-fashioned, a stick-in-the-mud, a fossil, a dinosaur, but I like my cricket to be sedate. The expectant heavy silence, ripples of polite applause, the occasional sumptuous roar when a vital wicket falls – that is my sort of cricket.

Thus, after a day of listening to a group of spectators, who I assumed had drunk far too much beer, incessantly chanting “Barmy Army”, I walked out of that wonderful old ground and vowed never to return to Test cricket. And I haven’t.

So it was with a heavy heart that I opened a new book entitled Going Barmy: Despatches from a Cricketing Foot Soldier which promised to tell me all about the travels of a cricket fanatic who had been conscripted into the Barmy Army.

The foot soldier in question is Paul Winslow, “freelance writer, magazine editor, website editor, travel junkie, beer lover and cricket addict”. In other words, he doesn’t appear to have a proper job but that’s OK. On more than one occasion, when I’ve responded to the question of what I do for a living with the answer that I’m a writer, the questioner has raised a quizzical eyebrow and sometimes even asked outright: “OK – but what do you really do?” So I know from where Paul is coming.

To be honest, after the initial shock of Graeme Swann using the F-word in his foreword – Sir Neville Cardus must be spinning in his grave at this new genre of cricket literature (don’t write in; I know he was cremated) – I quite took to Paul Winslow, although the Barmy Army don’t seem to have grown up much since that beer-sodden day at Trent Bridge 18 years ago.

They are now welcomed at most Test venues although Lord’s, to their credit in my view, disapprove of them chanting and singing. The players get along with them and appreciate them – indeed, Swann felt that he had arrived only when the Barmy Army composed a song especially for him – and most, but not all, of the press tolerate them.

According to the book they are scrupulously well-behaved, nip any bad behaviour in the bud, and raise much money for charitable causes. In those regards Winslow has to be congratulated for some deserved good PR on behalf of his fellow squaddies.

Going Barmy isn’t the official, or even the unofficial, history of the Barmy Army. It is the personal journey of someone who as a child was only vaguely aware of the game that eventually became his all-consuming obsession.

Along the way his career grinds to a halt, he finds himself homeless, and he is unlucky in love (although he ends up being very lucky because he falls for an Aussie girl and she falls for him. They now live in Australia).

Most of all, though, there is the cricket. It doesn’t matter if England are playing in Barbados, Brisbane, or even Belfast, you will almost certainly find Winslow there with the rest of the Barmy Army.

Winslow’s mates are certainly a colourful cast of characters, from Big G to Bill the Trumpet. My favourite is a British Airways pilot called Neil Rowe whose “army” name (I don’t think they bother with rank and number) is Southgate (apparently he is a doppelganger for Gareth Southgate) who likes to walk around Test grounds dressed as HM The Queen, which must be why Lord’s dislike the Barmy Army: they probably worry about likely confusion during one of the real sovereign’s occasional visits to Test matches there.

Southgate (the pilot, not the footballer) seems to have been at the centre of quite a few dubious incidents, not least during a World Cup match against Namibia in 2003, when an opposing fielder decided to join in a sweepstake that Southgate was organising. The player’s ability in the field was later called into question.

For all my reservations, I found this to be a most enjoyable book (and such great value; how do they do it for that price?) It is a travel work that brings together aspects of sport and culture that had left me far behind. Now I feel that I’ve caught up. Whether, the next time I hear the words “Barmy Army”, I’ll feel a warm glow rather than a shudder is another matter. But then I’m a dinosaur …