PHILIP BARKER gets his hands on that true first sign of spring, the year’s new edition of Wisden

The 2012 edition of Wisden, launched in the Long Room at Lord’s this week, is the 149th in the line and has a new editor, Lawrence Booth, of the Daily Mail. He is the 16th in a list which goes back to the first almanack in 1864. 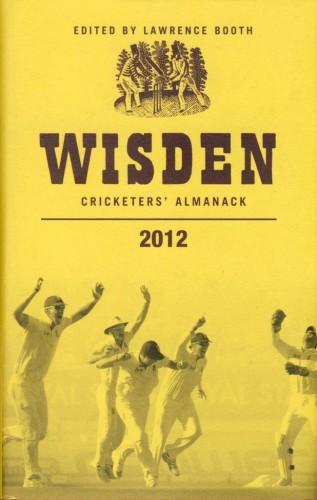 “The more Wisden stays the same, the more it changes,” said Booth, at 37 years old the youngest to take the reins in living memory.

“Would I replace the famous woodcut by Eric Ravillious on the cover with a smiley face followed by the letters ‘LOL’? Or change the age old primrose yellow colour to something more contemporary, Facebook blue perhaps?”

Happily, such revolutionary notions were soon discarded but there is still plenty to rattle the reactionary cages in the 1552 pages of this year’s edition. Even this is not enough for full scorecards of every match. We get potted scores of the one-day county matches for example, though the publishers claim the free online Wisden Extra service, introduced for the first time last year, fills in the gaps.

But there is genuine, 21st century, digital innovation: for the first time, the almanack is available as an e-book.

The feature pages record a tumultuous year for the game. The match-fixing court case is described by the former Daily Telegraph crime correspondent, and one of the newest SJA members, RDJ Edwards.

Just as Michael Vaughan’s exploration of Depression in Cricket struck a chord with SJA members as Radio Sports Programme of the Year, so Mike Brearley’s Wisden essay on the subject “Long Cold Lonely Winter” is a characteristic assessment of the problem.

“For sportsmen and women – especially men – depression as often been a badge of shame, especially in a world that values confidence, courage and the supposedly manly virtues of strength and assertiveness,” Brearley writes.

Michael Yardy contributes a moving testimony of his own experiences: “I believe you have to take on depression, not fight it but outsmart it.”

The five cricketers of the year include Kumar Sangakarra, who hit out at cronyism and corruption in his native Sri Lanka during the MCC Spirit of Cricket lecture. It did not pass without notice that the Sri Lankan Board refused him permission to speak to the Wisden gathering even though he had also been named World Cricketer of the Year.

Alistair Cook is also there, how could it be otherwise after his exploits in the Ashes and that mammoth 294 against India at Edgbaston? As Steve James observed in his profile: “He wanted more, he always wants more.”

The bowlers were recognised too. “Tim Bresnan, a novelist’s fast bowler, straight talking, uncomplicated, northern and broad” in the words of Tanya Aldred.

County stalwarts Glen Chapple and Alan Richardson made up the five.

The obituary pages include a number of cricket journalists. There is a full appreciation of Trevor Bailey, a long time SJA member, the sad circumstances of Peter Roebuck’s death are also recorded along with the passing of Yorkshire cricket writer Martin Searby.

On a happier note, Patrick Eagar’s receipt of the SJA’s Doug Gardner Award is also recorded.

Those who left Lord’s clutching their precious copies included many of the country’s leading sports writers, no doubt delighted they were described by novelist Howard Jacobson as a “ literary gathering” . He bemoaned the fact that his name is not to be found on any of the pages: “You are desperate to find yourself in there, so you will look anywhere, even in the obituaries.”