On Grand National day ANTON RIPPON reviews a book that offers an insight into an important aspect of the Queen’s 60-year reign: horse racing 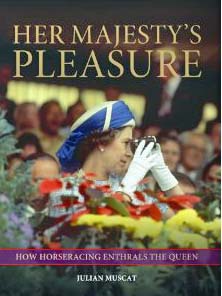 Should you ever find yourself needing a prominent personage to unveil a plaque marking the long-awaited refurbishment of the bar at your local bowls club, and feel that you can do no better than dash off a letter to Buck House inviting Her Majesty The Queen to do the honours, then bear one thing in mind: don’t arrange your big day to coincide with Royal Ascot or the Derby.

On the regal calendar, these are the only days ringed in red, days to be left untouched for any purpose other than to be spent at the races.

The Queen’s perennial presence at these fixtures confirms her love of the Turf. So when so many books are being produced to mark various aspects of 60 generally glorious years, it is quite appropriate that one such work should celebrate Her Majesty’s extraordinary association with horse racing.

Published next month to coincide with the Diamond Jubilee Pageant at Windsor, Her Majesty’s Pleasure: How Horseracing Enthrals the Queen has been written by Julian Muscat, who in 1987, after working on stud farms for seven years, turned to journalism.

For 17 years, Muscat wrote for The Times, mostly on racing, and he now contributes to a host of publications, predominant among them the Racing Post, whose book publishing division has produced this title.

In compiling the book, Muscat talked to dozens of people who have experienced at first-hand the monarch’s interest and knowledge in a sport that the author describes as being for her “not so much a favoured pastime as a full-blooded embrace”.

Muscat has chronicled the Queen’s every step, from her childhood fascination with horseracing to her connoisseur’s appreciation of bloodlines. It is an intriguing journey, much of it interlinked with the fortunes of the sport’s household names. Lester Piggott and Willie Carson have ridden royal classic winners trained by Cecil Boyd-Rochfort, Noel Murless and Dick Hern.

The book features contributions from racing luminaries such as Sir Peter O’Sullevan, Richard Hannon and Clare Balding, in addition to the Queen’s advisors past and present, Sir Michael Oswald and John Warren.

Through the eyes of Peter Williams, a stable lad who for 30 years looked after the Queen’s racehorses at Ian Balding’s stables, it also explores racing’s proudly loyalist streak.

What emerges from this collective account is a monarch in thrall to the sport. The Queen, it appears, enjoys nothing more than “talking horses” as trainers and jockeys do on a daily basis.

From Aureole via Highclere to Free Agent, her best-known horses play an integral part in the story. After inheriting her father, King George VI’s, string of horses, in Coronation Year of 1953 her horse Aureole was second in the Derby. Since then, she has won all five Classics except the Derby. Famously, in 1977, her Silver Jubilee year, she won the Oaks and the St Leger with her filly, Dunfermline. Muscat examines her “particular hope” of winning the Derby, and how close she came to realising it with Carlton House in 2011.

And we learn about the extraordinary depth of her knowledge and her appetite for minute detail. She recognises all her horses on the gallops, occasionally having to put her trainers right. In one instance she recognised an exercise rider she hadn’t seen for 25 years. The royal eye, it seems, is all-embracing.

The book, which is beautifully illustrated, will feature within an exhibition based on the Queen’s racing life that will travel around Britain’s racecourses throughout May.