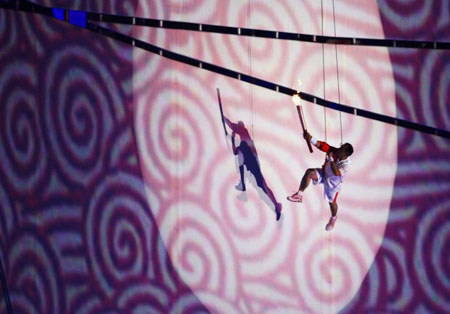 From Barry Newcombe, SJA Chairman
Beijing, Saturday: China’s statement to the world on what it can do for the Olympic Games left everyone open mouthed in the Birds Nest Stadium.

The 90,000 spectators there could not believe what was unfolding in front of them as the ceremony for the Beijing Games came to a staggering climax with the final torch carrier walking around the inner rim of the stadium to light the flame which stood hungrily above, waiting for its feed of more than two weeks of gas.

Beijing had managed to keep its finale a secret, crowning an opening ceremony of continuous style, optimism, welcome and the clever use of children in both song and dance. When gymnast Li Ning received the torch on the athletics track and set off on the final leg, he suddenly swept into the air as the cable

attached to a harness around his upper body tightened and lifted. He was off on a sensational one-man journey.

Because of the careful control of his pace when he reached the rim he was able to follow what he had clearly practised and took long impressive strides in harmony with the team controlling the wire. He circumvented the entire stadium, raising expectation with each long stride, and when his journey was over he took his time to set the Beijing flame alight. It will burn until August 24 and when it is extinguished, the whole Olympic show heads for London 2012.

The show ended last night with fireworks exploding all around the stadium and beyond. It was as good a package as anyone had seen in the special arena of the Olympics and athletes from 204 countries who took part must have recognised the quality and finesse of the night for which Beijing, and China, has been waiting so long.

â–¡ The cultural display which began the evening set a tone for what followed. It was a steamy night and the athletes had to wait a long time before they reached the arena for the midnight finish. But all of them will know they contributed to a sensational night.

â–¡ Each Olympics has its own set of values and Beijing has done something which may never be repeated, not because no country would not want some kind of follow up but because of the sheer financial outlay required to each such high targets.

The Chinese team, last into the stadium as is the custom, will have known from their reception that the country expects fully in
competition as well. But the beauty and imagination of the night will never be forgotten.

â–¡ Smog Blog: Clear Skies 1, Smog 6. Or maybe it is just the smoke from all those fireworks lingering into the morning?

â–¡ Inevitably going to an Olympic Games opening ceremony reminds you of other Games.

I was thinking back to my first Olympics, in Munich in 1972, when I was on the London Evening Standard team with Walter Bartleman, a genuine Cockney who had been a major in the Tank Regiment during the Second World War and had fought in Germany.

Also with us was the redoubtable JL Manning, one of the heaviest and most acerbic writers of his time. Our trio was under the command of sports editor Tom Clarke, back in Fleet Street, who had installed a telephone system at key points like Main Press Centre and the stadium which gave us one-button communication with the office instead of having to go through the lengthy routine of transfer charge calls.

I was so excited, this was the biggest sporting event I had been involved in, and coming down the steps of the British European Airways’ Trident 2 at Munich’s Riem Airport was like entering a kind of journalistic paradise. But I simply did not realise how demanding the task would be because there were deadines almost every hour and a great deal of chasing around to obtain the material to fulfil them.

Jim Manning became unwell and was hospitalised. That left Wally and myself to run the show and with the help of many colleagues who realised what Jim’s absence would mean.

I was involved in the first significant news story of the Games when I went with Doug Ibbotson, of the Evening News to the modern pentathlon, where the manager of the British team accused the Soviets of cheating in the fencing. That story caused quite a storm in the first week of those Games, because it was different, eye-catching and out in the country away from the Olympic Park and MPC. 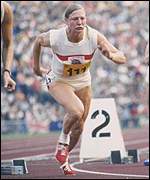 There were no mobile phones in those days, of course, and when Doug and I returned to the Main Press Centre we were besieged by colleagues seeking the facts.

â–¡ So it went on, with plenty of stories – Olga Korbut, Mark Spitz – and Munich reached the middle Sunday with Mary Peters, pictured left, giving British performances a boost with her penthatlon gold.

The next night Wally, stretched out on his bed in his vest, and I sat to discuss what would happen on the following day. It was a rest day in athletics and it was a question of assessing what might need our attention.

The next morning the phone next to my bed rang early. The caller was John Jackson, frontline newsman of the Daily Mirror team. “There is something happening in the Olympic Village,” he said. “I think you should get down there.”

I dressed hurriedly and rushed to the nearest point of the security fence. There were crowds of media everywhere. I front of them the Black September terrorist team had taken over the Israeli team headquarters.

So began the grisliest day in Olympic history. The Press doorstepped all day and into the evening – some of our group, like John Rodda and Norman Fox, even managed to jog into the Village or slide in under the wire. Eventually, the word came through that both hostages and terrorists were to be airlifted out of the Olympic complex.

There were two airfields available for use- Riem,the civil airport, and Furstenfeldbruck, a military strip. I went to Riem,Wally to the other place. When the shooting started there Bartleman, pressed a colleague alongside him into the grass on the perimeter and told him: “Keep your head down”, or words to that effect.

The night wore on when the shooting was over. We headed back from our different points to the MPC. At first, the German authorities said thatall the hostages had been saved. An hour later they had to admit that hostages had been killed.

The news story had come to an end there and then. But as the years have gone by, it has never truly finished.