Bryan Cooney, former Daily Mail head of sport, has died after a battle with prostate cancer.

The Scot, who had also been chief sports writer for the Daily Star for a decade, has been writing a blog since being diagnosed with the disease and it sums up a character who was never backwards when it came to saying what he thought.

He and wife Margaret rejected a third blood transfusion in May because of the threat of coronavirus and Cooney passed away in a Glasgow hospice on Sunday. 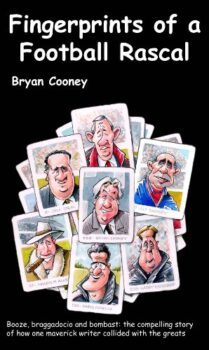 According to his Twitter bio, confessed alcoholic Cooney had been running a sports website in conjunction with former Scottish Sun chief sports writer Jim Black after quitting the Sunday Herald.

He was also the author of an e-book Fingerprints of a Football Rascal, the blurb of which reads: “There were unlikely scenarios, which were in turn incendiary, uproarious, frightening and deeply poignant. Add these ingredients to his own perilous journey through the corridors of journalism and alcoholism and you have a recipe for a riveting narrative.”

Cooney, who started as a racing sub on the Press and Journal, Aberdeen, was recruited by Paul Dacre in 1997 from the Scottish Daily Mail and left in 2000 because of ill-health and after a massive shake-up in the sports department. He wrote: “Fame and fortune are ephemeral, of course and, therefore, within six years I was gone and perhaps the legacy forgotten.”

His May blog does not hold back as he criticises former friends, colleagues and contacts for failing to get in touch with him once he knew he had only weeks to live. The title provides a clue – PC Be Damned: Dignity in Death.

He wrote: “But, honestly, we’re all bound up by hypocrisy, aren’t we? It smothers society; dilutes the best intentions. Maybe these people qualify as wimps on the embarrassment factor, and find themselves overwhelmed by influences beyond their control. Maybe I should have held judgment. But the thing is, in reality, I just don’t have the time. If there is to be any satisfactory recrimination, now is the hour.”

After taking early retirement, Cooney worked as a freelance. As a broadcaster, he completed six interview series for BBC Radio Scotland, one of which took a bronze at the Sony Awards. He also narrated an edition of Radio Four’s celebrated Archive Hour. He has written three books: George Connelly, Celtic’s Lost Legend; Fingerprints of a Football Rascal, and most recently Gerry Rafferty: Renegade Heart.