Mike Ellis, The Sun’s man on Merseyside from 1969-2003, has died. Former colleague and friend JOHN RICHARDSON, the SJA sports news reporter of 2018, pays this tribute.

There was widespread sympathy throughout the football world for Kenny Dalglish when the horrors of Hillsborough took their toll.

King Kenny resigned as Liverpool manager unable to continue after becoming mentally exhausted in the aftermath of football’s biggest disaster.

For Mike Ellis (left), The Sun’s man on Merseyside, there was to be no escape as he was caught up in the maelstrom which followed the newspaper’s infamous front page headline ‘The Truth’.

Suddenly he became persona non gratia in the eyes of the Liverpool fans understandably offended by his newspaper’s coverage of the traumatic event.

Mike himself was appalled by his newspaper’s stance and thought long and hard about his position. But as far as the club was concerned it was business as usual – even if everything had to go underground.

Mike who had built up unbreakable contacts throughout the years was not about to be jettisoned by those who saw him for what he was – a superb operator who never broke a confidence. A man who had ghosted the columns of Bill Shankly, Bob Paisley, Graeme Souness and Dalglish.

He had become great friends with ‘Sir’ Roger Hunt while his contacts book was brimming with telephone numbers the rest of us could only dream of owning.

As a young colleague on The Sun alongside another outstanding journalist Peter Fitton, who was in charge of the Manchester beat, I often benefitted from Mike’s burgeoning reputation. If Mike put in a good word for you then you were half way there.

Office politics saw Mike taken off covering his beloved Wales. Reluctantly I stepped into his shoes but typically he offered advice and helped open up a few doors with the likes of Ian Rush and Kevin Ratcliffe. There was no bitterness, just a helping hand whenever it was needed.

A dry sense of humour always made his presence in the Sun office a delight while an exclusive was never far away. 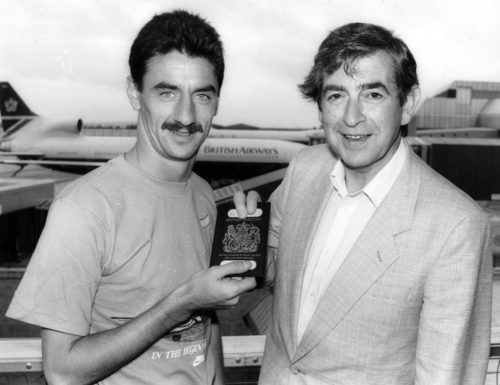 And if his musical idol Chuck Berry was in town you were urged to join him in paying homage to his favourite rock and roller. After a few drinks many of Europe’s bars would be serenaded with Berry’s back catalogue although we could have done without Chuck’s duck walk Mike!

Mike began his career with the Rhyl Leader, taking in the North Wales Press Agency and Hartlepool Mail before his break on the nationals as a sports sub editor on the old Daily Herald. When The Sun was launched in 1969 there was only one man to cover Merseyside, a young eager Ellis.

He was heartbroken when his pride and joy, a gleaming Ford Granada was stolen. Now it was going to be an insurance job and the advice was to hold out and not accept the first offer. A second offer seemed quite generous but he was told by a well meaning colleague not to commit, and even better offer would be on its way.

Before it arrived our crestfallen man from The Sun was informed that his car had been found – but smashed up, complete with the odd bullet hole after it had been used in a robbery. Sadly it wasn’t a write-off and it would have to be repaired.

That was about the only thing Mike got wrong in an outstanding career in which exclusive was his middle name.