Things are getting a little fraught over football coverage between local papers in Yorkshire. ANTON RIPPON reports

All is fair in love, war, and sports reporting. Well, maybe not the last one. Not if you are the editor of a weekly newspaper that has just seen its football manager columnist poached by a much bigger rival, the local daily. 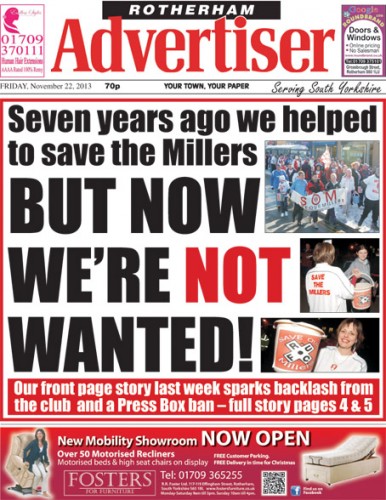 To be honest, it probably wasn’t surprising that Rotherham United manager, Steve Evans, withdrew his column from the Rotherham Advertiser. You didn’t need a crystal ball to see that one coming after the weekly found itself banned from using press facilities at United’s home ground.

What offended the League One club was an Advertiser front-page story about a kit shortage that prevented a six-year-old being a Rotherham United mascot. The football club claimed that the story was “disproportionate”, and since last month Advertiser reporters have had to pay to attend matches at the New York Stadium, while the paper relies on freelance photographers for pictures of United’s home games.

But, as if that wasn’t bad enough, the manager’s column then turned up in the Sheffield Star, the Johnston Press-owned title that this season ended 106 years of the print edition of its Green ’Un, when the Saturday sports paper went digital only.

Advertiser editor Andrew Mosley was “disappointed”. He told the holdthefrontpage website: “We’re not sure whether it was a deal agreed between Steve and the paper or with the knowledge of the Rotherham directors.

“Only the week before last, Steve turned down the chance to become the manager of Sheffield Wednesday, citing his ‘loyalty’ to Rotherham.

“We find it astounding that with the issue of press freedom and football clubs being the subject of an early-day motion in Parliament, another local newspaper would stab us in the back and in doing so, also stab press freedom in the back, by taking advantage of our dispute rather than backing us.”

The Rotherham Advertiser is part of the Garnett Dickinson Group, an independent media company that also owns South Yorkshire weeklies and produces magazines, brochures and catalogues as well as providing internet support for other magazine publishers.

Meanwhile the Star, whose Martin Smith was named Regional Sports Writer of the Year three times in eight years by the Sports Journalists’ Association, can’t understand what all the fuss is about.

Its editor, James Mitchinson, told HTFP: “I cannot comment on the reasons why the Rotherham Advertiser finds itself banned from its local football team. Indeed, to use a hackneyed footballing phrase: ‘We don’t worry ourselves with what the opposition is up to, we can only concentrate on our own affairs’.

“It disappoints me to receive a note from the trade press to the effect that the Rotherham Advertiser is unhappy that the manager of Rotherham United is writing for the Star. Were I to find myself in the same position, I’d dedicate my waking hours to resolving the matter in private, rather than picking more fights in the public domain.

“However, I do not believe it is healthy for such a stand-off to exist between any newspaper and a prominent community organisation. Ultimately, it is said community that suffers. Clearly the club has its reasons for taking the course of action it has, and it is not for me to comment upon the detail of that.”

The Advertiser’s ban is one of a number brought in by football clubs recently, which has led to MPs, including former sports minister Gerry Sutcliffe, signing an EDM that condemns those clubs and calls for a new code of practice on how they handle the media.