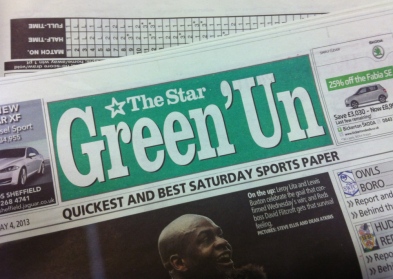 It is just over four months since we reported that, for one night only, a local evening’s sports paper was making a comeback, 40 years after it was last published.

In late February, the Oldham Evening Chronicle’s Green Final was on the streets within minutes of Oldham Athletic’s FA Cup fifth-round replay at Goodison Park.

Alas for the Latics, Everton triumphed 3-1 but, by all accounts, the decision to bring out the Green Final one more time was a success. Not so much of a success that the Evening Chronicle thought about doing it again before the season was out. But we hardly expected that.

In that piece, I said that, the last time I looked, only Sheffield, Southampton and Sunderland still produced Saturday evening sports editions. Well, look again. Now it’s only two.

Johnston Press has announced that the Sheffield Star’s Green ’Un will go digital from the start of the coming football season. The announcement on the paper’s website site didn’t say that, for the first time in 106 years, there won’t be a print edition. But that is the case.

Journalists at the York Street paper are said to be stunned, and the National Union of Journalists is livid about the decision.

Chris Morley, the NUJ’s Northern and Midlands organiser, has called upon the publisher to consult with readers over the closure. Speaking to Press Gazette – the industry magazine which itself abandoned its own weekly edition in favour of an online offering some time ago – Morley said: “For too long, senior newspaper executives with bloated salaries have been making decisions to close well-loved and widely admired titles after years of slowly bleeding them to death through lack of investment. Closure is a mark of their failure, not the failure of a title with a century-old tradition.

“Instead of getting paid as entrepreneurs growing their business, corporate terminators are showered with huge sums to hack off large parts of their own companies.

“The trouble is that they did not make these businesses. They therefore should not have the ability to snuff them out as publications on the streets without widespread debate and consultation with the communities from where these titles emerged.

“I challenge Johnston Press to engage with the people of Sheffield about the proposed loss of the Star’s Green ’Un edition – and have the guts for once to invest properly in their printed products to make them a success in combination with the new publishing platforms that exist today.”

Johnston said that no journalists’ jobs would be threatened by the closure of the sports paper, which last season was selling 4,000 copies a week.

Former Sheffield Morning Telegraph sports editor, Keith Farnsworth, told sportsjournalists.co.uk: “The Green ’Un was an essential part of my childhood back in the mid-1940s when it resumed publication after the war. I treasure the memory of what was a wonderful local sports paper. Football reports by Fred Walters and Taffy Williams, John Piper, Reg Whittaker, John Uprichard, etc, cartoons by Harry Heap; and in the summer a regular in-depth feature on Yorkshire cricket by Frank Stainton.

“Goodness, queuing up for my Saturday fill of football or cricket reports, sporting gossip, was such a pleasure, producing such a sense of eager anticipation.

“I even recall a spell when the paper carried football results for the most junior of teams, and when we lads in the Newhall district had a game on The ’Oller – a space between the houses. I telephoned the result: ‘Canny Street Rovers 10, Paget Street Kids 9’. Seeing it in print was pure magic.

“In later years, I contributed to the Green ’Un as a correspondent, and, during my spell on the editorial staff of the Star, I helped out a few times, in a very minor capacity with the production of the Green ’Un.

“By the time I was on the Morning Telegraph, the Green ’Un had the likes of Tony Hardisty and Peter Howard covering the local football teams, and I never stopped admiring the paper.

“I think it is fair to say that the Green ’Un was among the very best Saturday sports papers in the country, and it served the local public well, with coverage of not just the local professional sports, but schools sports. I deeply regret its passing.”

On the HoldTheFrontPage website, Star editor Jeremy Clifford, not surprisingly, took a different view to that of the NUJ: “It is an exciting development in the history of the Green ’Un, which will see it become far more immediate, responsive and reactive to what is going on in the footballing world.

“The Green ’Un brand has a long and proud history in Sheffield and this will continue. It started out with homing pigeons carrying the sports results back to head office and this is yet another development in its history.

“With changing times of kick-offs and the ready availability of results and reports now on phones, tablets and the internet, the printed product on a Saturday evening has far less relevance than it used to.

“People have found other ways of getting what they want, which is why we are responding in an entrepreneurial way by putting all of our resources into a digital platform, on mobile, website, Twitter and online, to ensure the brand name continues to have a future.”

Clifford has a point. As I remarked in that previous piece, as well as the various digital possibilities what has also helped to kill the Saturday evening sports editions is that no one can look at the fixture list at the start of a football season and guarantee match days, never mind kick-off times. And so fans who at one time waited anxiously for that Saturday teatime van to arrive, often to read about a game they’d just watched, now read about it on their iPads.

It is the same with so many things. I recall cursing Budget Day each year because it involved working over to ensure that the vital news – whether beer, fags and petrol had gone up – had to be communicated to a public whose main source of information on their way home from work was – as with football news – a newspaper.