Who’d be sent to Coventry, eh? Well, the rugby club formerly known as “London Wasps” for one.

The Premiership club is the latest top-class rugby business to flee the capital. But when “London” Irish decamped to Reading and “London” Welsh switched to Oxford, neither event caused as much upheaval.

Wasps’ move, however, has opened up a hornets’ nest with disaffected supporters accusing a regional newspaper of happily accepting a “gag” by a local council eager to shed the responsibility – and costs – of running a 2012 Olympic venue stadium.

The row had been brewing for some time but it really kicked-off when Les Reid, political correspondent of the Trinity Mirror-owned Coventry Telegraph, announced his resignation after claiming that he had been effectively forced out of his job.

Reid, who had been suspended for the previous nine months and who says that he is to take his former employers to an industrial tribunal, suggested on Twitter that the Telegraph’s handling of the controversial affair of Coventry’s Ricoh Arena was at the heart of the unhappy situation in which he found himself. He threatens to expose all in a forthcoming book.

Later he tweeted: “I resigned from @covtelegraph last week declaring intentions of tribunal & book on decline of public interest journalism.”

Until his suspension, Reid had led the Telegraph’s coverage of the sorry saga that surrounded the Ricoh Arena, where Coventry City FC had moved in as lodgers in 2005 after 106 years at their own Highfield Road.

The relationship between Coventry City’s owners, Sisu – which was described in Parliament by the Labour MP for Coventry North-East, Bob Ainsworth, as “a hard and ruthless hedge fund operation” which employed “spin and lies” and was “prepared to destroy a children’s charity to make money” – and the Ricoh’s operators, Arena Coventry Limited (ACL), which is owned by Coventry City Council and the local Alan Higgs children’s charity, has never been a happy one. 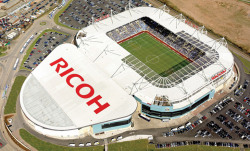 A rent dispute saw the football club move out of the Ricoh in December 2012 for a groundshare with Northampton Town, before returning last month with not much of a deal, or so it seems to supporters: a two-year lease on match days only with no permanent presence, no offices or club shop, just a share of food and drink sales on those match days.

Reid’s resignation last week coincided with news that Wasps had bought a 50 per cent stake in the Ricoh. Coventry City supporters had already taken to social media alleging that the Coventry Telegraph had been used as a “puppet” by a city council that had agreed to sell to the rugby club its share in the stadium. Then it was the turn of Wasps fans to rail against a decision that moved their club 82 miles’ drive away from its current base at Adams Park, Wycombe.

Meanwhile, Alun Thorne, the Coventry Telegraph’s editor of two years, announced that he was also leaving the paper for a new role based partly in the north-west. Unlike Reid, Thorne’s departure appears to be without rancour. He is working his notice and is due to leave on October 21.

Coventry Newspapers’ NUJ chapel said in a statement: “We are very sad that Coventry Telegraph editor Alun Thorne has taken the decision to leave the company for an exciting new job. In his two years with the Coventry Telegraph he has transformed the newsroom for the better.

“We refute any claims that the Coventry Telegraph has been gagged or censored. We reject any inference that our reporting has been anything other than fair, balanced and accurate. We believe we have a great team of reporters, production staff and management and we are proud of our achievements this year. We’d like to thank Alun for taking us into the digital age and giving newsroom morale a huge boost.”

The statement, it is claimed, was issued as a direct response to Thorne’s departure and was not directly related to Reid’s situation.

Reid, meanwhile, told Press Gazette: “I understand fellow journalists’ concerns about the reputational damage to the paper I worked hard for from hundreds of comments on social media.

“The NUJ Coventry chapel’s meetings are usually attended by a handful of members, they will not know the facts of my case which will only come out at the tribunal and in the book. Suffice to say many readers believe the Coventry Telegraph has not sufficiently scrutinised Coventry City Council.”

Wasps’ move from the Home Counties to the Midlands might have been predicted in the summer, when the club – founded nearly 150 years ago as “Wasps FC” – announced that it was abandoning the “London” prefix which it had added to the club’s name during the professional era.

The club’s original fan base, from Sudbury in Thames-side Middlesex, has so far coped with moves to Loftus Road, and then out to Wycombe, where the average crowd on matchdays has been around 5,000. Their new Coventry home, acquired on a 250-year lease for £20 million, has a capacity six times that.

The move will also see one of the great forces of English rugby parked on the doorstep of a formerly powerful force, Coventry rugby club, while competing for fans with the powerhouses of Leicester and Northampton, rather than their traditional London rivals Saracens and Harlequins.