It’s 30 years since The Sun ran the story of a sporting trailblazer with the front-page headline “£1m Soccer Star: I Am Gay”.

The sub-header ‘Justin Fashanu confesses’ – with its implication that by being gay, the footballer was doing something wrong – is just one part of the article that’s showing its age.

He was a pariah in the game back then but in February 2020, Fashanu was inducted into the National Football Museum’s Hall of Fame, recognising not just his pioneering decision to come out publicly but also his status as the game’s first million-pound black footballer.

His talent as a youngster at Norwich was undeniable – 40 goals in 103 appearances, and club legend status. A banner with artwork by David Shenton (above) commemorating his stunning Goal of the Season from 1980 has been displayed by fans at Carrow Road. Few would argue that his potential for greatness wasn’t derailed by the discrimination he experienced as a young man. 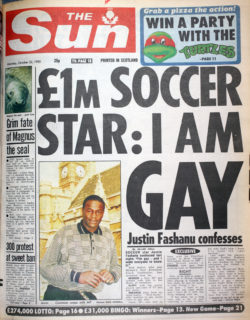 Brian Clough’s homophobia made Fashanu persona non grata at Nottingham Forest and sent his career into a downward spiral which was exacerbated by a serious knee injury. With racism to contend with as well, the striker increasingly fell on hard times and by 1990, the prospect of a £70,000 payday from a tabloid newspaper was too tempting to resist.

The editors and journalists of today operate in a very different climate when it comes to LGBT+ representation in the media. Yes, we still see the occasional tabloid front page about mystery gay and bi male professional footballers – often accompanied by a seemingly ubiquitous (and unhelpful) silhouette picture – but the kind of attitudes that influenced coverage of Fashanu’s coming out have largely been swept away along with the remnants of Section 28, the UK anti-gay law which was repealed in 2003.

Even so, it’s fair to say many in our industry and related roles still find topics of sexual orientation and gender identity in sport to be rather thorny. For some, they may no longer see LGBT+ in sports stories as in any way sensational, but more a case of ‘who cares?’ – and that’s not necessarily a negative sentiment. Others recognise the positive impact such stories can have but lack the confidence to tackle them, perhaps out of fear of saying the wrong thing.

It’s with that in mind that Sports Media LGBT+ – the network, advocacy and consultancy group I set up back up in 2017 – has released a new resources pack called ‘Rainbow Ready’. It’s aimed at anyone in a media and communications role – from senior editors to apprentice media officers, from PR professionals to agents operating athletes’ social media accounts – and offers to help them navigate all things related to sports and how we reflect the lesbian, gay, bi and trans people who play, coach, administrate and influence them. 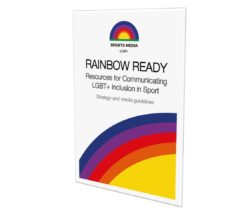 My background is in digital content. I’m the Senior Home Page Editor at Sky Sports and for several years, I’ve led on our support of Stonewall’s Rainbow Laces campaign, which seeks to make sport everyone’s game by raising awareness around LGBT+ inclusion. We’ve given a storytelling platform to those from grassroots to the elite, whether LGBT+ themselves or allies, to speak about authenticity, performance, and where necessary, the discrimination they have faced. In doing so, we’ve learned more about the wide range of sporting experiences within the community itself and where the barriers to progress persist. We’re making a wider impact too – our ‘I’m Game’ series from last year was nominated for an SJA British Sports Journalism award in the Television / Digital Show category.

Inspired by the work of BCOMS in shining a light on sports media’s lack of diversity, a group of us launched Sports Media LGBT+ three years ago to encourage more visibility and understanding for our part of the inclusion picture. The group soon took on an advocacy role – our #AuthenticMe initiative encourages conversations on how being true to yourself can help you achieve your best if you’re LGBT+ – and as a consultancy, we offer guidance and assistance to anyone with a goal in LGBT+ sport who wants to harness the power of the media.

‘Rainbow Ready’ distills our combined knowledge into a handy guide. There’s a Q&A that explains why the resources will be useful; a strategy for getting started in this space if it’s brand new or somewhat daunting; a breakdown of the messages that are worth communicating, with accompanying media guidelines; a list of potential pitfalls – such as terminology that could trip you up; and the various reactions you can expect to receive, and how to anticipate them. There’s also a glossary primer and links to more detailed guidelines on specific LGBT+ topics, such as the reporting of stories involving trans and non-binary people which are often nuanced and complex.

Amid greater awareness of the need for good mental health and the responsibilities we carry as individuals working in the media, it can be jarring to reflect on those Justin Fashanu headlines from yesteryear. There’s no need for ‘confessions’, just the confidence which comes through education and empathy.

Read and download ‘Rainbow Ready: Resources for Communicating LGBT+ Inclusion in Sport’ from the Sports Media LGBT+ website. The pack consists of a strategy and media guidelines, and is designed for anyone in a comms or media role who is looking for practical advice. Follow on Twitter and other social media platforms at @SportsMediaLGBT and email info@sportsmedialgbt.com for enquiries, feedback, etc.