More than 45 per cent of people working in the sports media industry who took a survey by the network group Sports Media LGBT+ say they have experienced anti-LGBT language or behaviour in the workplace in the last two years.

The survey results also show that nearly half of all lesbian, gay, bisexual and transgender people employed in sports media are either in the closet at work or are only out to their close friends and colleagues.

Sports Media LGBT+ launched the survey in order to provide information on inclusion to the DWord 3 conference organised by BCOMS at BT Sport on October 8. Some of the interim findings were discussed on the day of the conference, with delegates encouraged to take the survey.

From all the responses received, 67 came from people who are either working in sports media, who were previously employed in the industry, or who are currently seeking a sports media job. The majority of those people said they were LGBT themselves, although nearly a third were not.

The full results of the survey are available to view on the Sports Media LGBT+ website.

Network lead Jon Holmes, of Sky Sports, said: “BCOMS’ DWord conferences have outlined areas of significant concern for the sports media when it comes to diversity and representation for BAME people and women, and these new survey results demonstrate that there is plenty of work to be done on LGBT inclusion in our industry too.

“While Sports Media LGBT+ received many encouraging survey responses that indicated progress, the overall results show a distinctly mixed picture. Many people – both LGBT and straight – say they hear language at their place of work that they would class as discriminatory. Often these workplaces are environments in which LGBT employees feel it is better to keep their sexuality or gender identity hidden, to varying degrees.

“One of the starkest statistics was that more than 75 per cent of the sports media people we surveyed felt the industry was not meeting satisfactory standards of inclusion for those who are transgender and non-binary.

“As sport prepares for the start of the annual activation of the Rainbow Laces campaign in November, it should also be an opportunity for media businesses and senior leaders to consider if everyone on their sports desks feels able to bring their full authentic selves to work.” 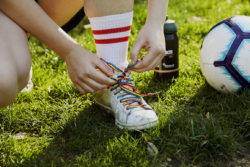 Sports Media LGBT+ was founded a year ago to bring together LGBT people and allies in the industry, and advocate for greater inclusion. The network recently held its first event in conjunction with BBC Pride, and backed by the SJA – an evening titled ‘Authentic Me’, hosted by BBC Sport’s Katie Gornall and featuring Olympic athlete Tom Bosworth and the racing driver Charlie Martin.