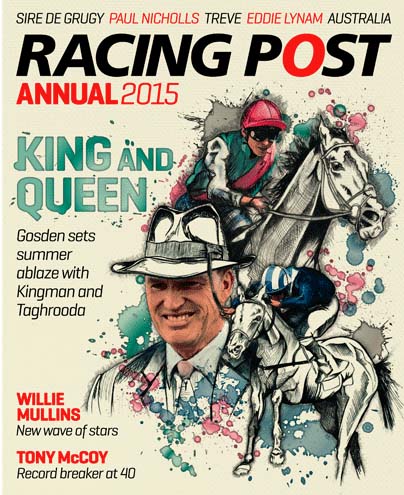 “The best pictures. The best writers. The best horses. The inside stories and the scandal.”

So trumpet the publishers. And rightly so, for the 2015 edition of the Racing Post Annual has it all.

Three years ago we said here that the annual was a good idea waiting to happen, and so it proved. The 2012 edition – the first – sold out, and so has every edition since (the cover price is unchanged since that first year).

Like each of its predecessors the 2015 edition is packed with stunning photographs by the Post’s award-winning photographers, Edward Whitaker and Patrick McCann, and with features and interviews covering every aspect of the racing year.

Again edited by Nick Pulford, the annual reminds us that while this year there has been no undisputed great such as Frankel and Sprinter Sacre – cover stars of previous editions of the annual – in 2014 there has still been no shortage of memorable moments, thanks to Kingman, Treve, Australia, Sire De Grugy, Jezki, Quevega, Taghrooda and others.

Tony McCoy, who at the age of 40 had another record-breaking year, talks to Alastair Down. McCoy has everything in perspective: “I appreciate things all the more because I know there’s a lot more behind me than there is still in front of me. But enjoying it is all about being successful … Am I riding better than ever? No, 2002 was when I was at my best because that’s what the numbers say.”

The annual covers the successes enjoyed by smaller stables in 2014, notably the triumphs of 25/1 Grand National winner, Pineau De Re from Richard Newland’s 12-horse stable and who was initially failed in the trot-up before the race; and Queen Mother Champion Chase victor, Sire De Grugy, who cruised to his first Cheltenham race win and was elected Horse of the Year by 70 per cent of those who voted on racingpost.com.

If you are looking for human stories, then there is no shortage either, from jockeys who overcame age-old battles with the scales and loss of form, to beating the odds when it came to surviving heart attacks and broken backs.

There are statistical sections for both jumps and flat racing, and the Annual 20 is the publication’s pick of which horses and people to watch in 2015.

Another winner, I would say.