My choice for the SJA Sportswoman of the Year is based purely on emotion. I have thrown away all semblance of balance, reason and clear-sightedness, because this athlete gave me all the sensations that sport should provide – I was in equal measure entertained, excited, fearful, anticipatory and, ultimately, overjoyed.

When Jo Pavey strode round the track to take the gold medal in the European 10,000 metres final it was her first gold medal at a major international competition after a 17-year senior athletics career. Just 10 days previously she won a gutsy bronze medal in the 5,000 metres at the Commonwealth Games in rain-drenched Glasgow.

The media went into a frenzy about Pavey’s late-blossoming athletics career; her ability to juggle motherhood with training; her round trip of many miles to the nearest training ground; the fact that she was at least 20 years older than most of her rivals. Overnight, she became a hero to the followers of Mumsnet; was touted as an inspirational figure to middle-aged women everywhere; was the subject of countless discussions about the ageing process; and was held up as a shining example of someone who never gives up.

But it is none of the above that have inspired me to champion Jo Pavey for this year’s award. It is purely the reaction she inspired in me during the running of those two events in Glasgow and then Zurich.

In Glasgow, I was sitting among a knowledgable contingent of athletics fans and we all agreed that Pavey had pushed too hard, too soon. There was no way she could keep the pace up and she was bound to be caught and overtaken. And we were all right. Pavey moved to the front as the leading group took the bell. The crowd roared her on, but as the Kenyan trio of runners took up positions besides and behind her, it all looked too familiar. Sure enough, they all streamed past and the excitement in the crowd died a little – Pavey was going to finish in fourth, once again a valiant loser.

Then the remarkable happened. As the runners took the final bend, Pavey came back at the three ahead of her. We spectators on the other side of the stadium looked at the big screen and there she was, jaw clenched, shoulders hunched, sinews straining and face screwed in pain, effort and determination. With the line approaching, Pavey caught and passed the third runner, Margaret Mariuki, and the whole stadium erupted. Might Pavey even catch her next rival, Janet Kisa? The line came too soon for Pavey to take silver, but that was the most popular bronze medal I have ever witnessed. 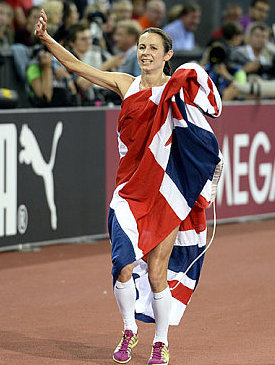 As one the people around me subsided into their seats. Some people were wiping tears away, others were swigging from bottles of water to assuage throats that had become tight and sore from shouting. In that self-deprecating way that us Brits have, we acknowledged that we had become just a little overexcited with sheepish smiles and wry comments. There were many more exciting moments on the track that night, but it was Jo Pavey’s performance that stuck in the memory.

Fast forward to August 13 and Zurich. On television, the BBC commentators were discussing her chances of victory and the mood was generally upbeat. And as Pavey hit the front with more than a lap to go, with athletes breathing down her neck and looking – dare one say it – younger, I certainly felt that she had gone too soon and we would be back to the old scenario of her rivals pouring past her to take the medals.

But what happened next was just a fabulous example of true grit and determination. Pavey sped up, she sensed the challenge from France’s Clemence Calvin and kicked. Her lead down the home straight increased and, while watching on a television screen doesn’t have quite the raw emotion of actually being there, that same tight throat, blurred vision and heart-constricting tension was back.

As Pavey crossed the line and the good folks in the BBC studio did their usual whooping and cheering, I fell back on to the chair feeling as if I had been through every stride with her.

As someone who runs a bit and who shares the same decade as Pavey, I feel a certain kinship with the athlete. This might explain why I felt so extraordinarily moved by her performances this year.

Or it could just be that, despite the cynicism and hard-nosed approach we tend to favour these days, deep down we all still love a story with a happy ending.