ANTON RIPPON looks back a hundred years at the public and press reaction to the 1914-1915 football season, which continued against the backdrop of carnage

One hundred years ago, The Times carried a letter from eminent historian AH Pollard: “ … Every club that employs a professional football player is bribing a much-needed recruit away from enlistment and every spectator who pays his gate money is contributing so much towards a German victory”.

You could see Pollard’s point. The British Expeditionary Force had suffered more than 58,000 casualties at the First Battle of Ypres. Yet against a backdrop of dreadful war news Everton, Oldham Athletic, Blackburn Rovers, Burnley and Manchester City were fighting it out for the Football League championship. Lancashire football in particular was having a good time, even if there was a war on.

Newspapers did not quite know how to respond. In an initiative that began in South Wales but quickly spread to England and Scotland, some regionals refused to publish football results.

The national sporting press, though, generally supported both the war and the continuation of the professional game. On August 3 – the very eve of the conflict – The Sportsman (at whose offices in July 1871 the idea for the FA Cup had been born) called for Great Britain to declare war on Germany but still saw no reason not to start the football season.

The Athletic News, which as far back as 1912 had called for the introduction of conscription, warned that the public would “abandon all sorts of amusements before football”.

And they did not have to give up the Saturday afternoon fix. Hostilities may have commenced on August 4, but on September 1 a new football season still began. After all, according to the politicians and propagandists, it would be “over by Christmas”. In April 1915, as Everton lifted the League title, came the first German gas cloud attack on the Western Front. Unlike the stand-offish opening months of World War II a generation later, in 1914-1915 there was no Phoney War.

As the slaughter unfolded, there were plenty of people horrified that the Football League and the FA had allowed the game to continue. As far as they were concerned, everyone connected with football was both unpatriotic and unproductive.

The FA responded by pointing out that 500,000 recruits had already been raised by football organisations, that of 5,000 professionals, some 2,000 were already in the services, and only 600 unmarried professional footballers had failed to heed the call.

Some people took particular exception to claims that football was not supportive of the war effort.

Frederick Charrington, heir to an East End brewery fortune who had renounced his inheritance and found his way into the Temperance movement, was given permission by the FA to make a speech on wartime recruitment during the half-time interval of a match at Craven Cottage, Fulham.

For patriots like Charrington, who was seen by many people as one of those grim Victorian philanthropists for whom any entertainment was morally suspect, footballers and their supporters were cowards.

Alas, no one thought to inform the club that he had been given permission to air his views. As soon as he began to speak, two Fulham officials set upon him, dragged him down a gangway and threw him out of the ground.

In April 1915, as the Second Battle of Ypres was under way, Sheffield United and Chelsea ran out at Old Trafford for the FA Cup final. Some of the 49,500-strong crowd were soldiers in uniform, and so when the Blades won 3-0 they lifted the trophy at the end of what would become known as the “Khaki Cup Final”.

The Manchester Guardian commented that many more young men should have been in uniform.

That 1915 Cup final was a jolly and patriotic occasion. The Irwell Old Prize Band provided pre-match and half-time entertainment, playing a selection of tunes from around the British Isles, a collection was made on behalf of the British Red Cross, and when the Earl of Derby presented the Cup to United’s captain, George Utley, he told those that could hear him above the din that everyone present needed to “join together and play a sterner game for England”. 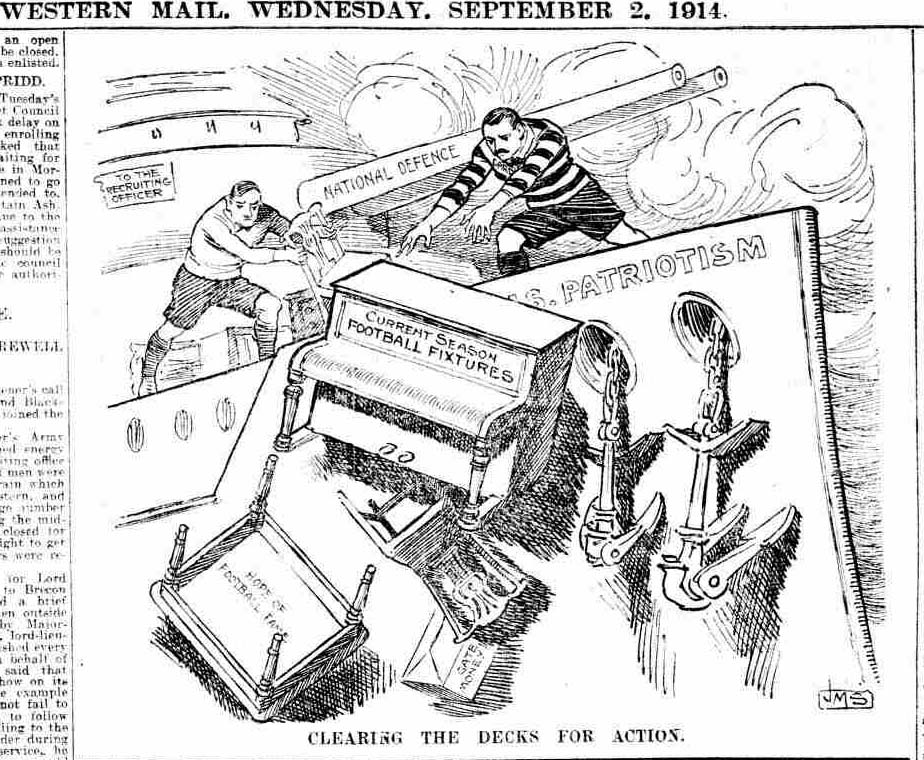 That was the end of first-class football for four years. The FA Cup and the Football League were suspended for the duration.

Sport – and particularly football – went on to do its bit. As early as September, The Sportsman had carried a full-page advertisement calling for fit young men to “Enlist in the Sportsmen’s Battalion” that was being raised by the Royal Fusiliers. Sportsmen’s Battalions would see action at Vimy Ridge, on the Somme, and at the Battle for Delville Wood.

A Footballers’ Battalion – the 17th Service Battalion of the Middlesex Regiment – would also see action on the Somme and elsewhere, losing more than 1,000 men including 462 at the 1917 Battle of Arras alone. England international Frank Buckley was the first to enlist in the battalion, rising to major and carrying that title with him as he carved out a successful career as a manager after the war.

In 1939, of course, the game shut down immediately war was declared, but was soon to be started up again on a wartime footing when its value to morale was recognised.