The shortlist for what is proclaimed as the richest and longest-running prize for sports book-writing, the William Hill Sports Book of the Year, was announced this morning. 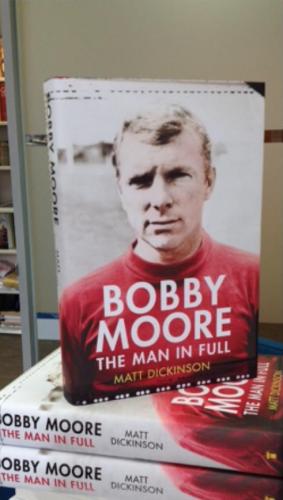 And what diverse list it is, with the name of the great Bobby Moore the most eye-catching among the titles. The only man ever to – or ever likely to, it seems at the moment – lift the World Cup for England is the subject of a biography by The Times chief sports correspondent, Matt Dickinson.

Dickinson’s Bobby Moore: The Man in Full caused waves of controversy when it was published, not just for the dark personal story it tells but also for its jacket that the Daily Mail’s Rob Shepherd thought was “the most unflattering picture” of England’s golden boy that he had ever seen. It does have the air of an East End gangster about it.

To balance the view, the Daily Telegraph’s Paul Hayward felt that “the leave-Bobby-be camp will not want to see the Krays or alcoholism or thwarted talent (at club level) feature in the narrative of a man who has taken his place in the culture as a deity. But guess what? To understand someone’s life more fully might just be to appreciate them even more. A superstar is much more interesting (and realistic) as a package of frailties and talents and setbacks than as an exemplar.”

This year’s William Hill crop features more titles that are as much about personal lives as they are about just the sport.

Welsh rugby player Gareth Thomas – the first gay professional player in his sport  to come out while still playing – has called his autobiography (written in conjunction with Michael Calvin), Proud, while a biography of Olympic and world champion figure skater John Curry, written by documentary film maker Bill Jones, is entitled Alone. Both men struggled to keep their sexuality a secret while maintaining their high-level public sporting personas.

In keeping with the controversial themes, Australian author Anna Krien makes the list with Night Games: Sex, Power and Sport, which takes the high-profile rape trial of a young Australian Rules player as the starting point for a wider examination of the darker recesses of sport.

Also in the running is Run or Die, the autobiography of Spanish endurance athlete and 2014 National Geographic Adventurer of the Year, Kilian Jornet, which charts his journey from an 18-month-old who regularly hiked in the mountains for five hours at a time to becoming the fastest person to run up and down Mount Kilimanjaro.

The shortlist is completed by two histories of sport – Played in London and Floodlights and Touchlines. The former, by journalist Simon Inglis, has already changed the landscape of London, as his research for the book has been credited with the Grade II listing of five sporting buildings.

The latter, by sports journalist and university lecturer Rob Steen – which we reviewed here – explores spectator sports’ intrinsic place in culture via a thematic history of professional sport. Inglis , Steen and Jones have all previously been shortlisted for the William Hill Award.

William Hill spokesman and co-founder of the award, Graham Sharpe, said: “The quality of writing speaks for itself – it’s an extremely exciting time in sports-writing.”

The judging panel for this year’s award is: retired professional footballer and former chairman of the Professional Footballers’ Association, Clarke Carlisle; broadcaster and writer John Inverdale; broadcaster Danny Kelly; award-winning journalist Hugh McIlvanney; and columnist and author, Alyson Rudd. Chairman of the judging panel is John Gaustad, co-creator of the award and founder of the much-mourned Sportspages bookshop.

The winner will be announced at an afternoon reception at BAFTA, in central London, on Thursday, November 27.