The latest book from Rob Steen has the look of a heavyweight. SARAH JUGGINS say that it comes with a deft touch 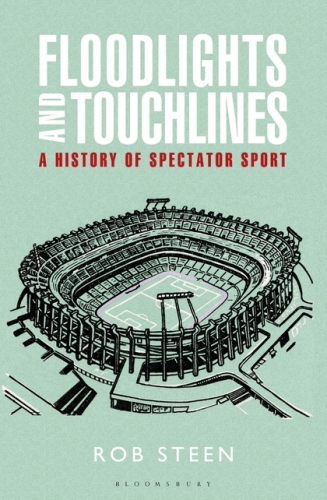 I have to admit I struggled with Rob Steen’s Floodlights and Touchlines: A History of Spectator Sport on the first few occasions I picked it up. The sheer bulk of the book, all 486 pages of it, made it a daunting prospect. I also found the format of the book oddly challenging, largely because I was expecting a chronicle of sport, and instead I was confronted by thematic rather than time-framed chapters.

However, once past those reservations, I discovered that far from an endurance event, this book provides one of the best and most illuminating narratives on sport that I have ever read, and what began as a sullen stroll soon transformed into a sprint finish. The breadth of subject matter is incredible and the expertise and knowledge of the author on sports – major and minor – on both sides of the Atlantic is mind-blowing. I was hooked and it is a book that I shall quote extensively and return to time and again.

From professionalism to politics, racism to players’ rights, the book explores many of the major themes that have shaped, channelled and challenged sport since gladiatorial times. The discussion is lightened and illustrated with countless anecdotes and stories; quotes from such esteemed philosophers and social commentators as Desmond Morris, Homer, Caitlin Moran and Winston Churchill; and neat segues into the larger social and political landscape of the era under discussion.

It is not a book which has to be read chapter by chapter; rather choose your topic and allow Steen to take you on a time travel through issues that permeate sports history and tradition. Women and their place in history hit some resonant notes, the better-known pioneering female sportswomen, Babe Didrikson and Fanny Blankers-Koen feature heavily, but the author, who initially wanted to “avoid the ghetto-ising of women’s sport” provides a panoramic vision of how sporting females have been side-lined and banned through history, and even today, gender remains a barrier to participation for many women.

The same is true of Steen’s account of sport and race. As he says: “Reflecting the outer world all too vividly, of all the battles fought in the sporting arena, none has been quite so ubiquitous, even now, as that of race.” So important is race in the discussion about sport, that two chapters are devoted to it – racism in sport in the United States and the situation in Commonwealth countries.

The book, for all that it gives an impression of being an academic, weighty read, has a lightness of touch, humour and an engaging style that will delight sports fans and amaze, even convert, perhaps, those who see sport in a less than flattering light.

It is a historical account of sport and its intersection with society – recounted by an author with a deep knowledge and an irresistible style of telling a story – making it one of the best sports books on the market today.

Wed May 13: SJA York Races Day, sponsored by Ladbrokes, at the Dante Festival