“The history of football media is the history of the media,” says Roger Domeneghetti in From the Back Page to the Front Room, his highly readable account of the development of football, its coverage across all media and the commercialisation of the game. 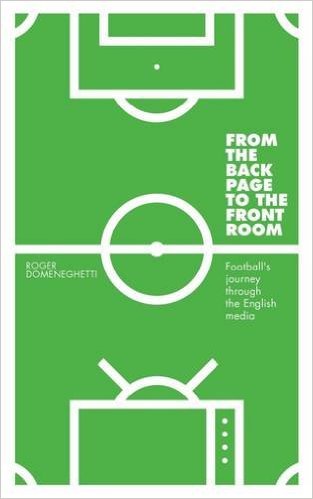 Domeneghetti charts the growing influence of the media on the beautiful game from the first mass-market paper – the Daily Telegraph – in 1855; the first football match to be filmed – Blackburn Rovers 4-0 win over West Bromwich Albion in 1898; the fractious relationship between the BBC and the Football Association stemming from the 1920s; to the non-existent or disparaging coverage of women’s football even as recently as the last quarter of the 20th Century.

Through interviews and archives, we meet some of the key figures in football media’s history. The giants of early sports journalism, such as James Catton, at 4ft 10½in tall, “a diminutive figure in the press box but he stood like a colossus over the early decades of football journalism.” Then there’s the football-film pirate Jack Cotter, who smuggled a camera inside a giant model hammer and filmed the 1923 FA Cup final between West Ham and Bolton. The influential Seymour Joly de Lotbiniere, who as Head of Outside Broadcasts in 1935, called for commentators to paint images with words – and created room for expert co-commentators who could provide insight to complement the commentators descriptions.

A chapter is devoted to the history of sports betting, from filling in the football pools coupons to the multi-million pound online world of today. It is estimated that 50 per cent of football’s betting turnover now comes from in-play betting, up from 10 per cent just six years ago. Domeneghetti points out that the ubiquity of the football pools cemented football into the fabric of society, now the convergence of televised football and the internet has led to a growth of online gambling that shows no sign of diminishing.

Throughout the book, the author uses a wealth of material to draw parallels between society and football. Technology, politics, national institutions, the impact of the World Wars – any number of factors are brought in to explain, account for or underline football’s passage from amateur sport to the multi-billion, global industry that it is today.

One of the most interesting chapters is The Press Takes Aim. Here, Domeneghetti recounts the increasingly critical voice with which the newspapers wrote about football. From the News Chronicle‘s headline, “Now the world is really upside down”, accompanied by a picture of the jubilant Hungarian ‘keeper walking on his hands after his team beat England 6-3 to The Sun‘s “Swedes 2, Turnips 1” after England’s ignominious departure from Euro ’92 – the press became something to be feared.

Domeneghetti uses example after example to underline the influence that men such as Rupert Murdoch and Kelvin MacKenzie had when it came to shaping public opinion – not just about how the national football team was playing, but the state of the nation at large.

Many of the footballing anecdotes should be familiar, if hidden in the mists of time. But what is so enjoyable about From the Back Page to the Front Room is that it feels like one of those great moments when you are down the pub with your friends, probably just having finished watching a match and the discussions start. You move from football to politics to popular culture and back again. You illustrate a point with a story that has had many airings, but each time it elicits a new response.

Domeneghetti has mastered a skilful weaving of our national sport into our social history and it is a great read as a result.