They’re under starter’s orders for the 2013 Bookies’ Prize. ANTON RIPPON runs the rule over the long-list for the £25,000 first prize William Hill Sports Book of the Year Award 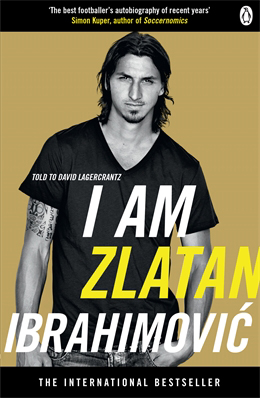 “The best footballer’s autobiography of recent years.” That is how Simon Kuper, the 1994 William Hill Sports Book of the Year winner, describes I Am Zlatan Ibrahimovic, which is long-listed for this year’s “Bookies’ Prize”.

The story of how a boy born on the wrong side of the tracks in Malmö rose from poverty to become one of the most talented European footballers of his generation – indeed, in 2012 Ibrahimovic was ranked fifth in The Guardian’s 100 Best Footballers in the World – is certainly a compelling one but, seeing as how journalist and author David Lagercrantz put it all together, is it an autobiography?

When is an autobiography really a biography is a question that has been engaging sportsjournalists.co.uk for some time. It certainly makes for an interesting judgement when it comes to doling out writing prizes.

So we asked William Hill spokesman, Graham Sharpe, who told us: “We’ve always allowed our judges to make up their own minds about the merits of all books, ghosted or otherwise.

“I don’t think I’m breaking any confidences by saying that some judges have been less enthusiastic than others about ghosting.

“There is little doubt, however, that ghosts can sometimes tease more self-analysis out of a subject than might otherwise be the case. We rely on the publishers to inform us where there is use of a ghost and we recognise them where possible.”

This year’s William Hill 17-strong long-list contains more than one ghosted “autobiography”, but if we shove that niggle to one side for a moment, this is certainly a strong field of runners covering a wide variety of sports – football, perhaps inevitably, takes up more than one-third of the list but eight other sports, including tennis, rowing, horse racing, table-tennis and cycling, are also featured – and several countries including Britain, the United States, the Netherlands, Italy, France and Sweden.

There are some famous names, of course: Lord Coe with his autobiography, Running My Life (we calculate this is possibly Coe’s fourth autobiography, out-doing even Wayne Rooney); Katherine Grainger, who finally scooped her long-awaited Olympic rowing gold in front of a home crowd at London 2012, for Dreams Do Come True; Jimmy Connors, the most successful tennis player of his generation, for his autobiography, The Outsider; and Arsenal legend Dennis Bergkamp, for Stillness and Speed: My Story. Staying with Arsenal there is also Philippe Auclair’s Thierry Henry: Lonely at the Top – A Biography. So at least that book’s provenance is crystal clear.

If Duncan Hamilton’s Immortal: The Approved Biography of George Best lifts the title then it will make history. Hamilton, who I remember as a slightly shy reporter at the Nottingham Evening Post in the early 1980s, has lifted the William Hill twice already, in 2007 and 2009. Three times would be a record.

If you’re looking for an outsider to back with the sponsors, then Ed Hawkins, already the SJA’s Sports Betting Writer of the Year on more than one occasion, might be worth a punt with his delve into the murky world of cricket match-fixing, Bookie Gambler Fixer Spy: A Journey to the Heart of Cricket’s Underworld.

I’ve also got my eyes on Doped by Jamie Reid. The real-life story of a 1960s racing doping scandal ¬– gangsters, sex, drugs but no Rock ‘n’ Roll – was reviewed here recently. As was David Walsh’s Seven Deadly Sins: My Pursuit of Lance Armstrong, and Brough Scott’s Henry Cecil: Trainer of Genius.

Another entry that catches the eye is The Boys In The Boat: An Epic True-Life Journey to the Heart of Hitler’s Berlin by Daniel James Brown who tells the inspiring story of nine working-class American lads who stunned the world at the 1936 Olympics by lifting rowing gold, all set against the backdrop of the Great Depression.

The longlist in full (alphabetically by author’s surname):