David Walsh has written four books about disgraced Tour de France rider Lance Armstrong but this one, ANTON RIPPON says, is about more than the cyclist 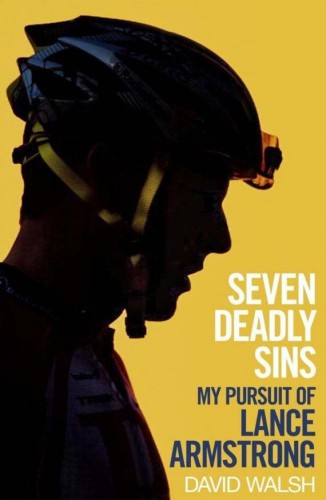 David Walsh is a brave man. Most of us could accept being accorded the titles of “fucking little troll” and “the worst journalist in the world” provided they were bestowed by the man we were attempting to expose as one of the biggest sporting cheats of all time.

But it takes a brave journalist to go after a sportsman who recovered from cancer to blast his way to an astonishing record, and who then wrote an inspirational book and became a world-famous charitable benefactor.

Walsh, multi-award-winning chief sportswriter of the Sunday Times, was on the end of both those insults. Lance Armstrong, now accepted as ringleader of “the most sophisticated, professionalised and successful doping programme that sport has ever seen”, was the man doing the name-calling.

And Seven Deadly Sins: My Pursuit of Lance Armstrong is the book that recounts Walsh’s unrelenting effort to prove the case against probably the biggest fraud in the history of sport. At one stage, even Walsh began to wonder if he was becoming obsessed in his pursuit of Armstrong (after all, this is his fourth book on the man).

He also began to wonder if the British legal system would ultimately stymie his attempts to uncover the truth behind the seven-times winner of the Tour de France: “It was like trying to follow the logic of Alice in Wonderland. He looked like a duck, walked like a duck, sounded like a duck but until the laboratory actually came out and said that he was a duck, we weren’t supposed to even ask a question about His Duckness.”

The man who started out as “a fan with a typewriter” persevered and the fact that the 2004 book he wrote with Pierre Ballester’s LA Confidential contained many of the allegations that later formed the basis of the United States Anti-Doping Agency’s damning report into Armstrong says it all. When, in October 2012, Armstrong was stripped of his seven Tour titles and received a lifetime ban from cycling, Walsh rightly felt vindicated, although he writes here that he doesn’t actually like to say that.

It would have been an immense shock for Walsh when he began to realise that professional cycling had a drug-fuelled darkness; and an even greater shock as he came to understand that Armstrong was at its centre. So, bravely, he began his quest to expose the myth.

This is an intensely personal story, never more so than when Walsh talks about his son, John, who was only 12 years old when he was killed in a cycling accident. Like his father, John had a knack of asking awkward questions, and this, in part, is what spurred on David Walsh. On the day that Armstrong learned of his punishment, John would have turned 30.

The case against Armstrong is now well documented and Seven Deadly Sins is more about the journalistic pursuit of him: how the Texan’s bullying tactics were ignored – again, bravely – by Walsh and by fellow sportswriters such as Ballester and Paul Kimmage.

The searchlight shines on sports journalism. Walsh tells how he persuaded Vincent Browne, then his editor on the Dublin-based Sunday Tribune, to give Kimmage a job. Walsh had been compiling a column from Kimmage’s thoughts but soon realised that the professional cyclist was a writer in his own right. Browne, who gave many young sports journalists a start at the Tribune, agreed. Last year, Kimmage, himself so involved in the bid to expose Armstrong, was named by  Press Gazette as one of the top 10 most influential sportswriters in Britain.

Seven Deadly Sins is now among the short-listed titles in this year’s British Sports Book Awards. Last year’s winner was Kimmage’s Engage, written with Matt Hampson. Kimmage’s writing career had been kick-started when his own cycling and drugs confessional book, Rough Ride, won the William Hill Sports Book of the Year in 1990. Ten years later, some – no doubt including Walsh and Kimmage – felt it wrong that a ghosted biography by Armstrong, It’s Not About The Bike, should be awarded the same prize.

David Walsh’s latest book, it is fair to say, is about more than just the cyclist.