What a great front page that was for the Daily Sketch on October 31 1963: “Swiss Beauty Held in Biggest Horse-doping Scandal. Now Yard Hunts Crooked Bookies.” 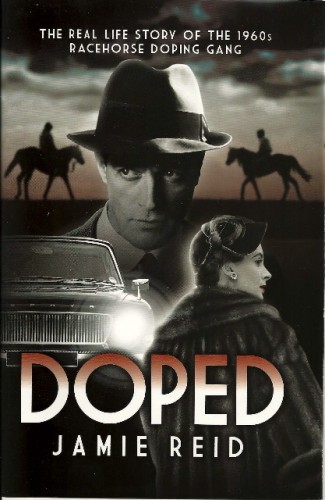 Swiss beauty? Horse-doping? Crooked bookies? Not to mention drugs, sex, class and royalty. They should make it into a film. And they might yet, now that Jamie Reid’s new book, Doped, tells the full story of what the publishers describe as “a real-life Dick Francis”. Raymond Chandler more like.

Reid’s gripping and fast-moving style tells of the gangsters and glamorous women who surrounded Bill Roper, bookmaker and gambler, and Micheline Lugeon, his beautiful Swiss mistress, in the late 1950s and early ’60s.

Over a three-year period, Roper’s gang, who had their headquarters in Rachman’s Notting Hill, made the equivalent of several million pounds at today’s values by gathering intelligence from racing stables, and then breaking in – or already having someone on the inside – to knobble horses.

They weren’t forcing performance-enhancing drugs on no-hopers, however. They were making sure that hot favourites didn’t win. And Roper’s supplier, Edward “Teddy” Smith, aka “the Witch Doctor”, boasted that he had enough drugs in his Surbiton flat to stop a thousand horses.

Only when the gang breached Fairlawne, the stable of the Queen Mother’s trainer, Major Peter Cazalet, did the Jockey Club finally wake up to the scale of the problem. The sport’s ruling body called in Scotland Yard, which added to Roper’s mounting problems. He was already at the mercy of assorted racketeers and strong-arm men who demanded a share of the spoils.

Reid, a regular columnist for the Financial Times’s How To Spend It supplement and author of several highly acclaimed non-fiction books, including the 1992 William Hill Award short-listed A Licence To Print Money, captures the period beautifully: “England in the early 1950s. Fog and rain. Bus stops and train strikes … Billiard Halls. Station caffs. Chip shops …”

They were places where the likes of Lord Rosebery and the Duke of Norfolk wouldn’t be seen dead. But the nobility and the plebs – please don’t sue – had at least one thing in common: a love of horse racing.

The difference was that high society could bet on credit with accounts at bookmakers. Off-course betting was against the law and so unless a working man could get to a racecourse, he couldn’t have a bet. Only, of course, he could because illegal back-street bookmakers proliferated and were tolerated, raided once a year “by appointment”.

The post-war period was a golden age of horseracing. Reid tells of the late Geoffrey Hamlyn, for 56 years a starting-price reporter with the Sporting Life, who recalled a time when tracks were awash with great bundles of black market money and with no betting levy or duty, or costly overheads, bookmakers played for high stakes. No wonder the sport was so open to abuse.

Actually, not everyone was happy. The first post-war Labour government had toyed with the idea of banning horseracing altogether. Lord Rosebery went to see Prime Minister Clement Attlee and demanded that the idea be dropped. Rosebery then persuaded Ben Clements, editor of the Sporting Life, not to publish detailed betting reports because he felt that racing’s image would be further tarnished if the full scale of the massive wagering that was taking place could be read about every day.

It was against this background that Bill Roper emerged and eventually – driven by a need to balance family life with a luxurious Kensington apartment and a beautiful mistress – began to take the knobbling of racehorses to an altogether more sophisticated level.

The mistress – Micheline Lugeon – became his spy and it was only after she bluffed her way into a behind-the-scenes tour of the Queen Mother’s trainer’s facilities that alarm bells finally rang. Scotland Yard embarked on a three-and-a-half-year investigation into “the biggest doping gang in history”. And with both the police and gangsters on their trail, Roper and Lugeon resorted to even more desperate measures to survive.

Forgive the cliché, but this really is a book that I couldn’t put down. Reid writes in an almost cinematic way, beginning with that misty November afternoon when a mysterious and beautiful “Frenchwoman”, calling herself Mademoiselle Rosemarie Laumaine from Paris, arrived in a chauffer-driven car to pay an unscheduled visit to Fairlawne.