PETER BILLS, the biographer of Jean Pierre Rives, reviews a new book about the former international and his latest career, as a sculptor

The march of the media moguls, and by that I mean companies not necessarily individuals, has transformed the world of publishing. Blitzed it, more like. 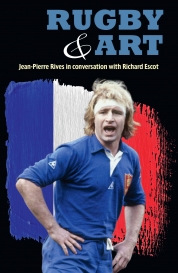 Amalgamations, closures, retrenchments have dominated the publishing business. Today, Amazon rules the roost. Small publishers and book shops? Some say they will become endangered species, if they have not done so already.

Thus, we ought to take our hats off to the smaller publishers of contemporary times, those willing to put toes into icy waters and risk much.

For sure, if we had to rely on the major publishers alone, French rugby writer Richard Escot’s book Rugby & Art, published by Sports Books Ltd (run by the SJA’s former treasurer, Randall Northam) which is a series of conversations with the former French rugby captain Jean Pierre Rives, would never have seen the light of day.

At 150 pages, this is no lengthy tome. But what it is, is a fascinating series of conversations between subject and author, full of reminiscences of rugby, past times, people and acquaintances. For anyone who knew Jean Pierre’s era of the 1970s and early 1980s, it is a small but worthy delight.

Rives has always been a thinking sportsman. Today, he is a renowned sculptor and he puts into words his love of art.

But for rugby followers, there is much more on offer than just nostalgia. Jean Pierre offers many challenging, stirring thoughts on the game as it is played today. He advocates some innovative ideas on how to improve the modern game, perhaps eliminate some of the elements that have not enhanced the viewer’s pleasure.

Some may accuse him of being dinosaurial. But it is a cheap tag and a wrong one. He by no means castigates everything about the modern game. Indeed, he claims some things are better. Which is true. Besides, he explains and justifies his opinions with clarity.

His idea that if a player takes the ball to ground, possession should be conceded to the opposition, is intriguing given that most breakdowns in the modern game are a fighting frenzy of a shambles that are close to impossible to referee properly according to every law.

Escot gently steers Rives this way and that. We meander slowly through a multitude of subjects but the text is never less than fascinating.

If you knew Rives and his time, you will enjoy this offering. Whatever the Amazons of the world might think, it is a worthy addition to the shelves.