One of the unexpected bonuses of serving on the SJA committee during the earlier part of this century was the drinks at the bar once the meeting had finished (I know, I know… but bear with me). The reason being that John Jackson, that globe-trotting stalwart of the Daily Mirror, was also on the committee at the time, and it was an enjoyable diversion to hear JJ’s anecdotes of times past when journalists and sports stars ate, drank and would travel together with the absence of mutual suspicion.

I tried to encourage John to write his memoirs on the basis that a sports journalist’s life was fuller and far more interesting than the dreary, formulaic autobiographies (and I use that term loosely) of the stars we wrote about. JJ wasn’t about to put pen to paper, so I did the next best thing of using him as a columnist once I became editor of the SJA Bulletin. That worked perfectly and the result was a series of amusing and entertaining pieces. 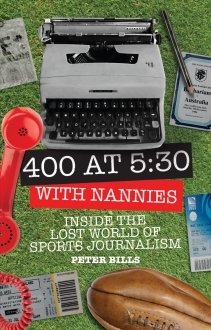 If any more proof was needed that sports scribes should publish their memoirs then I offer as Exhibit A Peter Bills’ 400 At 5.30 With Nannies.

The book is sub-titled “Inside The Lost World of Sports Journalism”, and Bills, one of rugby union’s most respected writers, has written a highly entertaining account of his 40-plus years in sports journalism, mostly spent as a freelance.

Like many top sportswriters, Bills had an apprenticeship at Hayters Sports Agency, although making the tea and phoning through other writers’ reports appeared to be his main tasks before a job at the Southern Evening Echo in Southampton put him on the front line. Back in London, Bills spent a few weeks as cover on a red top where he learned to fill in an expenses form ­– like many of us, an early experience of creative journalism.

But Bills’ working life has mostly been that of a freelance journalist and, although for many years he had the safety net of being editor of Rugby World magazine, other freelancers will certainly recognise the long hours, constant travelling and imaginative ways of securing a telephone (in the pre-mobile phone days, of course) to dictate copy back to newspapers or agencies – or to phone in radio reports – and in Bills’ case this included the time zones of South Africa, Australia and New Zealand. I, too, used the ploy of sticking an “out of order” notice on the nearest public phone box. So if anyone is reading this near Old Trafford cricket ground, I think I forgot to remove that sign in 1985, so if you would be so kind…

Bills has been quite happy – or at least readily available – to diversify away from his chosen subject. So in his book we encounter The Who, Spike Milligan and Oliver Reed, among other characters. His modes of transport include various car chases to airports, as well as a blagged trip on Concorde. Other perks include turning up Jean-Pierre Rives’ home on a cold autumn morning to be met by a “fabulous creation of a female” who greets him wearing a “black nightie”.

Arguably his greatest coup was an interview with Nelson Mandela. Indeed, the author is so chuffed with that one that he includes a large chunk of it. Bills was a fierce opponent of apartheid and refused to travel to South Africa after seeing at first hand the brutal oppression the majority of its population lived under. It was a stance that was not popular with many rugby writers at the time.

At 315 pages, Bills’ latest book is a bit too long. In fact, it is longer than most of the autobiographies Bills has co-written,  but nobody said sports journalists are short on ego. One section seems to be included just to get off his chest a dislike of call centres. He should really have had more trust in the anecdotes, some of which are laugh-out-loud funny.

Bills is also not immune to falling into the trap of stereotyping: the Romanians are “swarthy” and “moustachioed” (a bit like his own press pass picture on the book’s back cover), the Italians, specifically the Romans, all have “cashmere coats” and the Irish are always dragging you off “to the nearest bar” – and it was irritating continuously reading Irishmen being called “yer man”.

He finishes the book, though, with a passionate defence of journalism and the newspaper industry, which is as good as any I have read before, and one that could only come through an extensive knowledge of its workings. Read it and make up your own mind.

Gareth Edwards has penned the book’s foreword, which gives you an idea of the quality of Bills’ contact book, as well as the A-list characters we meet throughout his journey. What a frantic one it appears to have been.