Blackpool FC may have fallen out with their local newspaper, but that hasn’t stopped The Gazette marking the 80th birthday of one of the Seasiders’ greatest players – and one of the paper’s former journalists – by presenting him with a birthday cake. 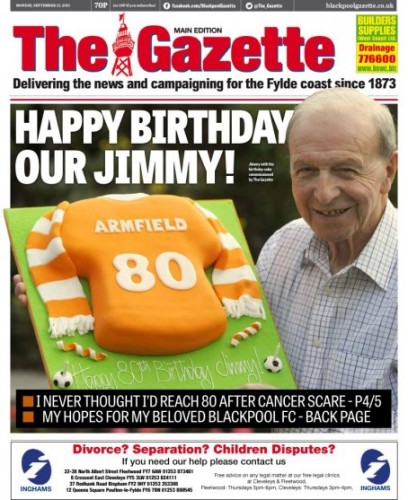 The paper celebrated former England and Blackpool captain Jimmy Armfield’s big day earlier this week with the cake, produced by a local baker, and a front-page tribute to the man who also wrote about football for the paper.

Armfield made 627 appearances for Blackpool and won 43 England caps, played in the 1962 World Cup in Chile, captaining his country on 15 occasions.

After his playing career, Armfield managed Bolton Wanderers and Leeds United, leading the latter to the European Cup Final in 1975. After that he went into the media, writing for the Daily Express and working for BBC Radio, something he still does with acute observations for Radio Five Live.

Gazette football writer Will Watt said: “There’s nobody more in Blackpool that deserves it. Whatever we did for him probably isn’t enough. As a contact he’s great. I can pick up the phone, dial his number and he always answers.

“He’ll ring up and just talk to you about football which, as a sports journalist, is a really privileged position to be in for me. Every time he talks to me I just learn something, he’s fascinating.”

Armfield who lives in Blackpool, has supported numerous The Gazette campaigns over the years and after surviving a cancer scare, has been a fundraiser for several charities.

Watt said: “He’s done so much for the newspaper and the town.

“He couldn’t be more helpful and he has a great relationship with The Gazette.”

The same can’t be said of the paper’s relationship with the club at present.

Then the club issued a statement urging supporters to “seek accurate information” from sources other than The Gazette because the local paper had published “a number of inaccurate and misleading headlines or articles”.