The latest edition of a long standing football annual has been published against a background of sadness and is reviewed by ERIC BROWN. 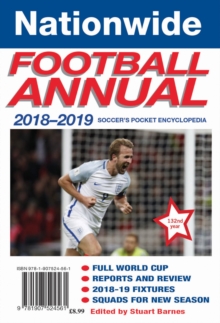 Football’s oldest surviving football annual  is back on the bookshelves, providing another set of facts and figures ready to dissolve any pub argument.

The 132nd edition of the pocket annual now known as the Nationwide Football Annual as usual features more than 500 fact- crammed pages on British football for a bargain price.

There are full world cup reports, results and lineups plus club player squads for the new season and fixtures. All of football’s records are here and as a former editor I appreciate the diligence, concentration and hard work it takes to get this updated pocket encyclopedia into shops so soon after a major summer tournament. Current editor Stuart Barnes has done a fine job.

The latest edition is tinged with sadness. During the world cup the death was announced of Albert Sewell, editor between 1983 and 1997 when it was known as the News of the World Annual. Albert was BBC TV football statistician from 1968 to 2005 and is the source of many facts and figures still engraved indelibly into the current edition.

Albert, who produced Chelsea’s match programme for nearly 30 years, was made an MBE for services to football in 2005.

The Nationwide Football Annual 2018-19 is published by Sports Books price £8.99