The author of a new book charting Wolverhampton Wanderers’ promotion season has pledged to donate a proportion of the proceeds to Cure Leukaemia. 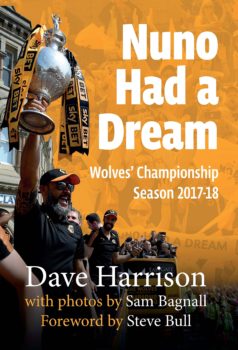 Highly-respected former national newspaper sports journalist and SJA member David Harrison has gone back to his roots to pen Nuno Had a Dream.

The Wolves success story was woven round goalkeeper Carl Ikeme’s leukaemia diagnosis in July 2017. Friends, teammates, and supporters joined forces to get behind Ikeme, who has since gone into remission and retired from the game.

Harrison said: “I set out to write the book when it became clear it was going to be a revolutionary season at Wolves.

“I know we had won promotion to the Premier League before but this time it felt different.

“There was clearly a new culture developing – both in terms of financial outlay and the style of football which was unfolding on the pitch.

“It became a real labour of love, researching and obtaining the views of fans.

“As for the donation to Cure Leukaemia, that was a suggestion I put to the publishers, St Davids Press, and they jumped at the idea.”

Harrison and club photographer Sam Bagnall have combined to produce a 160-page book with more than 100 photos, many of which have never been seen before.

Over-crowding in Delhi? Not at the Commonwealth Games