DELHI DIARY: Ever thrown a party to which no one’s turned up? DAVID HARRISON, of the News of the World, says the crowds at the Commonwealth Games continue to disappoint 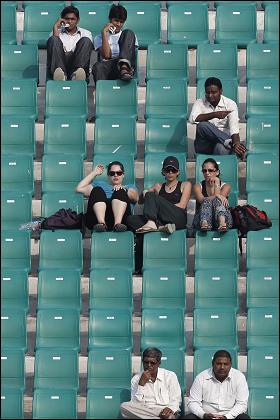 The cheers rang out long and loud through the late Delhi night air.

An even bigger roar went up the following afternoon as the locals finally found their voices.

So had the Commonwealth Games finally captured the public imagination? Actually, no.

On the first occasion last week, it was the gatherings of various journalists huddled around TV sets who celebrated the win by Graeme McDowell over Hunter Mahan to finally clinch the Ryder Cup for Europe.

Secondly, it was the joyous home supporters who were on their feet as VVS Laxman steered India to victory in a thrilling run chase against Australia.

As for the Delhi Games, they were being greeted mostly with a shrug of indifference and the type of attendances which would embarrass a struggling club in the Blue Square Football Conference.

Even an upsurge of interest that saw bigger crowds in the main stadium for the finals of the women’s discus and 800 metres could not hide the rows of empty seats at many of the venues. Four years ago, 100,000 attended the two-day Rugby 7s tournament; in Delhi, rugby’s first day attendance looked like it would be lucky to have attracted 1,000.

Worrying tales of snakes, sanitation and security obviously deterred many overseas visitors from making the trip, but the local population did not readily warm to their appeal either.

At one tennis doubles match there were more people on court than there were in the stands.

Elsewhere the sprinkling of spectators seemed to be made up mostly of friends and relatives of the competitors, giving the events the feel of an overblown school sports day.

To be fair to the hosts, there were enormous teething problems before the Games began and it has taken a monumental effort just to get them started.

The lack of attention to detail has reminded many veteran Games-goers of the ill-fated Atlanta Olympics where nothing worked efficiently and even less was done to put it right.

The bus driver who got lost taking swimmer Becky Adlington to the pool for her first event on Monday was a scenario familiar to those who attended the 1996 Olympics.

Before making my first trip to India I was told by friends who had made the trip themselves to expect a teeming mass of humanity where poverty-stricken amputees live their lives on the streets begging for an existence.

The beggars have been cleansed from the city for the duration of the Games, swept to an area out of town and out of sight of the television and newspaper journalists, lest they give the wrong image of a nation still irritated by its portrayal in Slumdog Millionaire.

The beggers have been replaced by troops – a whole army of them the size of which could launch a serious invasion of Iran. You cannot move 15 yards down one of the main streets of Delhi without bumping into a machine gun-wielding soldier.

With the threat of terrorism still on maximum alert, that is understandable and welcoming for locals and foreign visitors alike.

Behind the shop front, however, there are still brief glimpses of the real Delhi. The Delhi no one seems to want you to see.

There is a dirt track road leading to the Main Press Centre where taxi drivers have to drop off journalists. It stinks.

Human waste is littered everywhere, packs of dogs roam and on one day there was an emaciated chap pushing a bike with buckled front wheel dragging his humble possessions behind him. The cull of the poor had overlooked him.

The flavours, sights and sounds of the Indian sub-continent are generally missing from the main shopping area Connaught Place where the global brand names like Reebok, Nike, Pizza Hut and McDonalds compete to grab your attention.

If it were not for the incessant buzz of the auto rickshaws searching out passengers, with your eyes half closed, you could be in any major city in the world. Even Atlanta.

This is an edited version of a column that first appeared on the News of the World website, and is reproduced here with the author’s permission.